City To Central Park's "Kite Man": Get Out Of Sheep Meadow!

Frank Rodriguez has been marching back and forth across Central Park’s Sheep Meadow for over 50 years. It’s the only way, he says, for his handmade, brilliantly colored kites to catch the northeastern wind. Regulars at the park never see Rodriguez without his mangled plastic kite carrier and a trail of admiring children. But in the decades since he became known as the “kite man of Central Park,” the 74-year-old retired machinist has watched his stomping grounds become gradually less hospitable to flying kites. “It’s a poor man’s hobby,” Rodriguez says.

Rodriguez has received a handful of summonses for flying kites in Sheep Meadow. Each are worth a few hundred dollars, he said. He hasn’t paid any of them. His legal counsel, which he sought out after being written up, told him he didn’t have to pay the fine.

“Every time I see a ranger giving a kite flyer a hard time,” Rodriguez says, “I go up to them and say, ‘Keep flying. There’s nothing they can do.’” 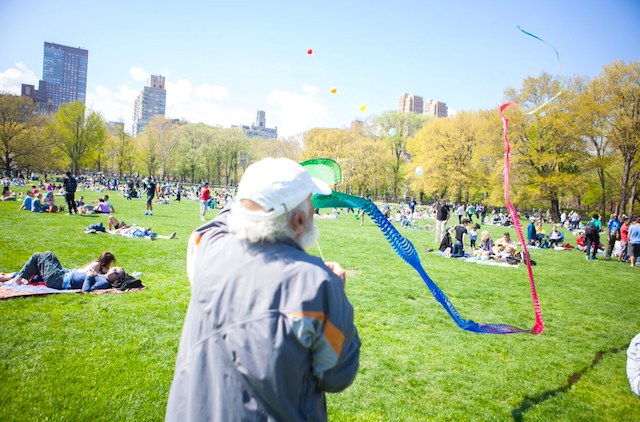 Until just a few days ago, the Central Park Conservancy's website deemed Sheep Meadow "the perfect place to...fly kites," among other low-impact activities you'd expect in a pastoral patch of land in Central Park.

But the Parks Department is about to make sure people know Sheep Meadow is a no-fly zone. They’re looking into adjusting the signage around the 15-acre pasture, which could draw more attention to Rodriguez’s supposedly illicit hobby.

“Thousands of visitors come to Sheep Meadow daily during the peak season,” said a spokesperson for the Parks Department. “And in such a densely populated spot of the park we want to make sure we provide a peaceful spot for people to escape the hustle and bustle of the city.” 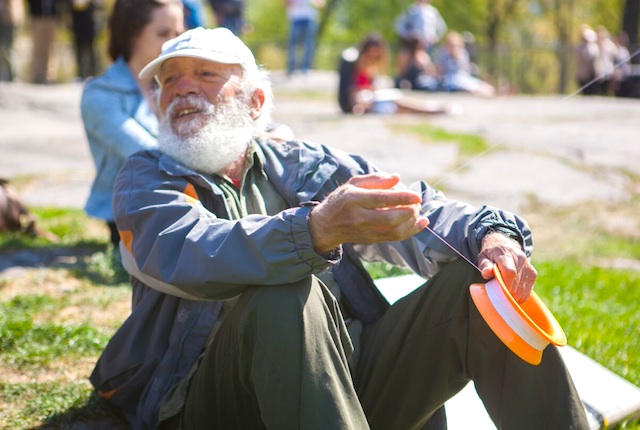 Supposedly because they scared horses, kites were banned in Central Park until 1966, roughly 16 years after Rodriguez arrived in New York City from Puerto Rico, where he started flying kites at age three. His family was so poor, he said, that they would make kites out of old socks. As the kite flew higher, the sock’s thread would function as kite string.

After arriving in New York, Rodriguez’s mother took a job as a seamstress in the Garment District. Rodriguez trained as a machinist, crafting parts for displays at Macy’s.

In the ‘60s, Rodriguez used Sheep Meadow to test-run his kite designs, commingling with the park’s love-ins and tangled bodies littering the grass. The northeastern wind would blow through the park in a straight jet. There were no fences limiting his range.

In the ‘70s, concerts hosting tens of thousands dug up the lawn on Sheep Meadow and turned it arid. In 1980, a private, not-for-profit conservancy took over the duties of maintaining Central Park, and placed barriers around Sheep Meadow to preserve its natural beauty. The Central Park Conservancy made Sheep Meadow the park’s first Quiet Zone. Organized sports, audible music, pets and kite-flying were prohibited.

“The park looks better,” Rodriguez says. “But the freedom isn’t like before.” 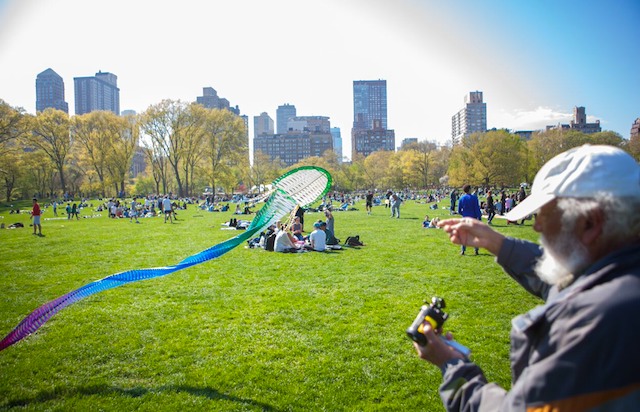 On a recent, warm, spring afternoon, Rodriguez walked the length of Sheep Meadow, kite in hand, expertly dodging incoming Frisbees and rugby balls. His rainbow kite was affixed to a fishing reel. Its tail curled around a young man with a solo cup.

Spotting a fighter kite in the air, Rodriguez wondered out loud who was flying it. More pressingly, he wondered whether they were out to snap his kite string, a la The Kite Runner (fighter kite battles used to take place on rooftops in the East Village).

Its operator, it turned out, was an old kite-flying friend of Rodriguez’s: Karl Szilagi, a 52 year-old exhibit technician at the Hall of Science. With a tinge of nostalgia, Szilagi described how he and Rodriguez were a part of Central Park’s thriving kite culture in the ‘60s and ‘70s.

“It petered out pretty dramatically by the ‘90s,” Szilagi said.

Since then, Szilagi said, he has to be on the lookout. He recalled that in the late ‘80s, when he was making enormous kites that required heavy cord, he flew one out of sight—a feat for a kite so large. Soon after, a police helicopter landed on one of the Great Lawn’s ball fields: A commercial airline pilot spotted his kite and reported him.

The luxury residences surrounding Central Park have also escalated in height, blotting out the sun and chopping the wind up into intermittent twists. The bends around the opulent condos create turbulence for kites. And with the completion of 432 Park Ave. (1,396 feet), 111 West 57th (1,428 feet) and 217 West 57th (1,530 feet), flying a kite in Sheep’s Meadow will only become trickier.

Szilagi thinks the buildings have something to do with the clampdown on kites. About three decades ago, Szilagi flew a box kite that pulled so hard the string snapped. He later saw it hooked along the side of a building, spinning in a circle and threatening to break through a window.

Asked about Rodriguez’s legendary status in the park, Szilagi notes that “He’s the Pied Piper with children.”

“I saw him one time with this little girl,” Szilagi continued. “All he had was a brown paper bag that blew by. He said. ‘I’m gonna make a kite out of this.’ He starts tearing the paper, poking holes in it, putting string through, and then this thing that was blowing by as garbage a few minutes ago was a kite. She loved it!”

Rodriguez demonstrated how he and his cousins made their first kites in Puerto Rico. Folding a piece of paper into six sections, Rodriguez used a needle hidden in his plastic kite holder to poke string through tape-reinforced holes. He used his teeth to cut the string (“That’s my scissors”). He affixed it to some fishing line and launched it in the sky. 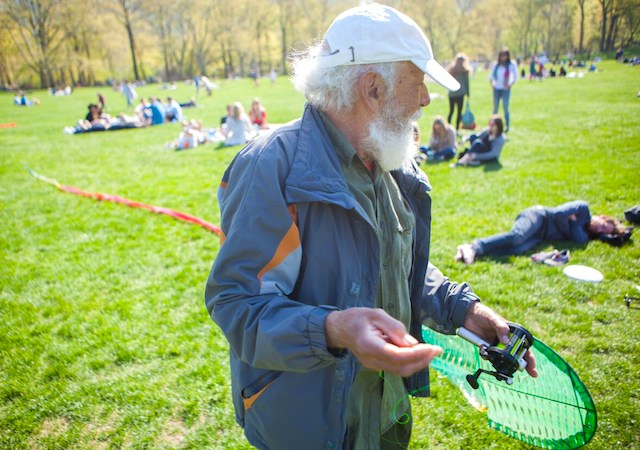 Rodriguez says that in the past, groups of veteran kite-flyers would meet in the middle of Sheep Meadow to trade secrets on building and flying their aircraft. The kite-flying community has dispersed since then (despite the Park Department’s intermittent kite festivals, one of the only “designated” times and places for kites in Sheeps Meadow).

A Bangladeshi man approached Rodriguez with his wife, admiring his fighter kite in the air. “Where did you buy them from?” he asked. “I sell them,” Rodriguez replied. “That one up there’s $20” (double the price of a decade ago). The man, a UN retiree named Kazi Rahman, hoped to buy a kite for his grandchild. He recalled that in Bangladesh, he used to fly bamboo-stick fighter kites from strings armed with fiberglass to tear down his opponents’ kites.

Rodriguez bemoans the fact that most New Yorkers have lost their taste for kite flying, but says he understands why. “People are busier working now, surviving,” he said. “As time passed by and the economy changed, things changed.”

Cecilia D'Anastasio is a fact-checker and research assistant at VICE and The Nation Institute, as well as a freelance journalist.