A day after Mayor Bill de Blasio announced a public health emergency requiring pretty much all Williamsburg residents to make sure they’re vaccinated against the measles, he’s being threatened with a lawsuit.

Attorney Michael Sussman, who has filed two similar suits against pro-vaccination orders in Rockland County recently, told Gothamist/WNYC Wednesday that he and some other lawyers planned to file court papers later this week.

“Progressives in New York who want to scream and yell about Donald Trump have got to be concerned about the over-exercise of executive authority by executives in our own state,” Sussman said.

He admitted that officials do have some powers during outbreaks of this sort, such as quarantining infected children or keeping unvaccinated children out of schools where measles cases have been found. “What they don’t have the authority to do,” Sussman said, “is to enter these broad, highly intrusive orders, which are effectively dictatorial in nature, which circumvent the law that we have.”

The public health emergency issued Tuesday morning states that within 48 hours, “any person who lives, works or resides within the 11205, 11206, 11211 and/or 11249 zip codes and who has not received the MMR ... shall be vaccinated against measles.” If not, they face fines of up to $1,000 dollars, forfeitures, and even imprisonment. (MMR stands for the measles, mumps and rubella vaccine.)

Mandating vaccination has a century’s worth of legal precedent. In the 1905 Supreme Court case Jacobson v. Massachusetts, justices upheld Massachusetts’ mandatory vaccination rule during a smallpox outbreak, where people could be fined $5 if they refused.

Still, civil libertarians are raising questions about whether the de Blasio administration’s measles order conforms to that precedent. Donna Lieberman, the executive director of the New York Civil Liberties Union, said the emergency declaration indicates the city could forcibly vaccinate people, which she described as “an extreme measure which is not provided for in the law and raises civil liberties concerns about forced medical treatment.”

“In addressing this public health crisis, the government is required to pursue the least restrictive means possible to balance individual autonomy with the public health risk,” Lieberman said in a statement. “In this case, measures such as a quarantine or penalties for non-vaccination may be permissible, but forced vaccination is not.”

“We would never require people to be vaccinated without their consent,” Dr. Barbot said. “We have issued this order to raise people’s awareness..to make sure that they are up to date on their vaccinations that’s the main point here.” 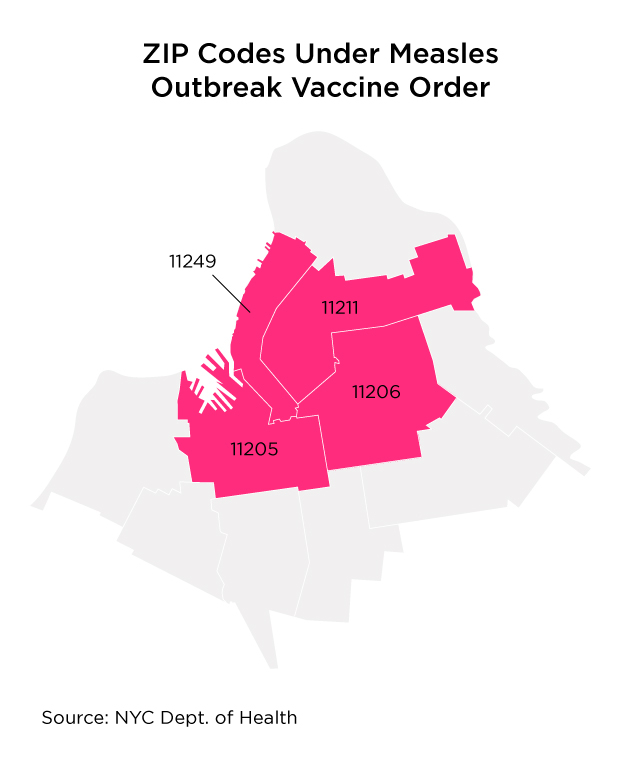 Since the measles outbreak began last October, city health officials have confirmed 285 cases of the virus, including 21 hospitalizations and five patients who needed intensive care. Of those sickened by the virus, public health officials said, 225 or 79 percent were not vaccinated at all, 20 had one dose of the measles mumps rubella vaccine, 12 had both doses of the vaccine, and 27 had an unknown vaccination status.

Along Lee Avenue Wednesday, a bustling commercial strip with butchers, bakers and shops that bisects the heart of South Williamsburg, some residents said they supported the city’s step towards requiring vaccines in their neighborhood.

“It’s a small group and they do not define Williamsburg,” said a young woman named Chaya, referring to people who oppose vaccination in the neighborhood. She declined to give her last name. “They’re putting kids in danger.”

A 67-year-old man named Sy W., who declined to give his full last name, said that although he believed in vaccination, he didn’t think the city should have the right to tell people what to do with their children.

But a 36-year-old man named Alex, who also declined to give his last name, wrestled with both sentiments at once, saying he understood the need for personal liberty, but said that his nephew has an autoimmune disorder and cannot be vaccinated—and was recently exposed to measles virus while at the doctor’s office.

“If he contracts measles, that could be fatal for him... I don’t know. It’s a tough call because on the one hand you don’t want the government to intrude too much on people’s rights,” he said. “People have personal views, no one can dictate what personal views they have, but they have to think about other people’s conditions.”

Some leaders of Williamsburg’s Hasidic community have embraced the city’s order, including Rabbi David Niederman, executive director and president of the United Jewish Organizations. He said Williamsburg residents would comply without ever needing to be fined by the city.

“I am convinced... people will learn how the Department of Health is committed and it will never get to fines because everybody is going to be vaccinated,” he said.

But Dr. Jay Begun, a pediatrician in South Williamsburg who’s treated dozens of measles cases in his office and diagnosed around 50 more remotely, said no community can get to 100 percent immunization levels.

“But I'm hoping that we're able to raise the levels of immunization to achieve the level of herd immunity needed to prevent further outbreak,” he said.

Most of Begun’s patients do not ardently oppose vaccines, rather they're hesitant because of misinformation about their safety spread through conference calls and slickly produced manuals. Dr. Begun said that the emergency order might be effective in persuading those parents on the fence.

But nurse practitioner Blima Marcus, a past president of the Orthodox Jewish Nurses Association, said she didn’t think mandating vaccines was the right approach, though she said she understood the need for drastic measures.

“It’s not getting to the root of the problem,” Marcus said. “The government needs to put their efforts into understanding the root cause of the hesitancy and fears of vaccinating and addressing that...What you really need to gain from the community is trust with slow, long-term education. You’ll really get people to listen and reverse the damage that’s been done by the anti-vaccine movement that’s so vocal here.”

Marcus is working to dispel myths about vaccines among ultra-Orthodox mothers through a book she and her colleagues are writing on the subject,

Janlori Goldman, an expert in public health and social justice who teaches at Columbia and NYU law schools, said the current outbreak illustrates the conflict between public health and the state law dating back to the 1960s allowing parents to apply for religious exemptions for immunizations is sending a conflicting public health message.

“New York law allows people to opt out of vaccinations based on sincerely held religious beliefs, yet as we see, if they do that, they put themselves and the broader community at risk of outbreaks and epidemics,” she said. “Isn't this a good time to reconsider the religious exemption?”

City officials estimate that about 1,800 students at Williamsburg yeshivas are not vaccinated, largely because of the religious exemption. The New York State legislature is currently considering a bill that would remove the right of parents to claim religious exemptions and still send their kids to school, much as California did in 2015 following an outbreak of measles traced back to Disneyland.

#anti-vaccination
#measles
#vaccinations
#original
Do you know the scoop? Comment below or Send us a Tip