A new Department of Investigation report [PDF] cuts against the assumptions that hold up NYPD Commissioner Bill Bratton's Broken Windows policing strategy—that cracking down on quality of life issues like excessive noise and public drinking deters more serious crimes like assault and murder.

Reviewing arrest data from the last six years—including more than 1.8 million quality-of-life summonses and 650,000 misdemeanor arrests—investigators found no correlation between the rate of misdemeanor summonses and arrests, and that of felony crime. While quality of life arrests (blue line) and summonses (orange line) decreased significantly between 2010 and 2015, there was no corresponding increase in felony complaints (purple line). 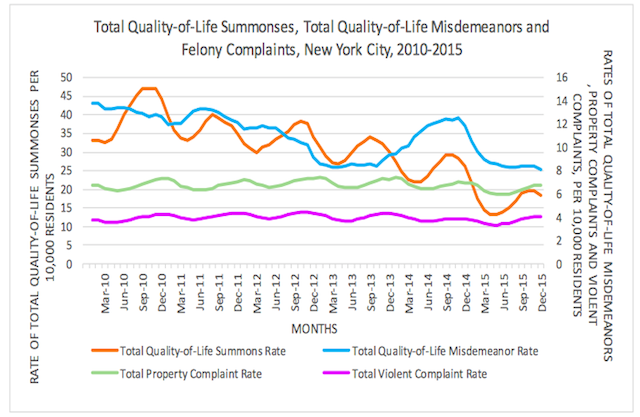 Today's report also notes that quality of life enforcement in 2015 was most heavily concentrated in precincts with large black and Hispanic populations, and among NYCHA residents and boys and young men between the ages of 15 and 20.

To suggest that Broken Windows policing is racist and bungles crime reduction efforts is hardly news—the same conclusion has been reached repeatedly over the years using a wide range of metrics. A 2014 John Jay College of Criminal Justice study [PDF] found that more than a third of misdemeanor arrests in NYC are dismissed at arraignment, and steady courtroom monitoring by the Police Reform Organizing Project (PROP) suggests those numbers are even higher.

Under stop and frisk, Broken Window's arguably not-so-distant Bloomberg/Giuliani cousin, violent crime across the country fell even as misdemeanor arrests in New York City climbed. From 1990 to 2013, the arrest rate for black males aged 18 to 20 tripled.

It's important to note that the City Council recently voted to decriminalize most of the quality of life offenses targeted in this report. However, the new regulations preserve NYPD officers' right to make arrests as they deem appropriate. "The rights, responsibilities, and capabilities of my police officers don't change at all," Bratton told WNYC recently. "If anything we're giving them more discretion.... My officers still have the right to make an arrest if the behavior is egregious or inappropriate."

While today's report encourages the NYPD to adjust its arrest and summons rates based on long-term trends, it painstakingly avoids an all-out condemnation of Broken Windows. From the report:

"On one hand we welcome the findings," says PROP head Bob Gangi. "Now there's an unimpeachable source coming forward, a city agency that reports to the same mayor that Bill Bratton does, saying flatly that there's no evidence supporting that Broken Windows is effective."

"But the recommendations are soft, and do not take the findings to their logical conclusion," he added. "If the strategy hasn't been effective, then don't tinker with it. Don't make modest amendments to it. End it."

Update: The NYPD is also, predictably, unhappy with the report, issuing a statement calling the report's "basic assumptions and so-called statistical methodology... deeply flawed." The NYPD's statement further claims: "The report fails to acknowledge what all New York City residents know: that every community in the city is safer and has a better quality of life due in large part to the extensive quality of life enforcement efforts and proactive policing that was implemented in 1994 by the New York City Police Department."

In response to that response, the City Department of Investigation hit back with their own statement, saying, "We strongly disagree that our Report’s statistical methodology is 'deeply flawed.' Our team of statistical and law enforcement experts ensured that each point made in the 84-page Report accurately reflected the data provided to us by the NYPD and was in context. Indeed, despite the heated rhetoric, the NYPD demonstrates no actual methodological flaws.

"To suggest that the Report does not recognize the value of quality-of-life policing or the need to crack down on public urination is absurd given that we acknowledge this in the very first paragraph of the Report, as well as in other places throughout the Report."

#broken windows
#department of investigation
#news flash
#statistics
#original
Do you know the scoop? Comment below or Send us a Tip