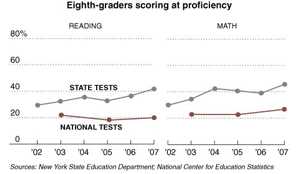 City Schools Chancellor Joel Klein characterized last year's assessment test scores as "good," but critics say that they represent a lack of progress and a failure of Mayor Bloomberg's efforts to reform city schools. City kids' scores stayed flat on national assessment exams in math and reading, with a slight improvement in 4th graders' math scores and a drop in 8th graders' reading scores. "New York City’s eighth graders have made no significant progress in reading and math since Mayor Michael R. Bloomberg took control of the city schools, according to federal test scores released yesterday, in contrast with the largely steady gains that have been recorded on state tests."

Klein defended the students' under achievement, by noting that 79% of New York City's 4th graders were testing at or above the national average, and performing only 2% below the state average in math and reading. In fact, Klein said that the fact that urban schools were performing so little below wider averages is a "landmark to be celebrated."

Some were not as enthusiastic about the apparent lack of progress in kids' test scores.

"However you slice it, there's no significant change in achievement," education historian Diane Ravitch said. "If you were to judge the city on progress, I think the city would get a D."

"The NAEP scores call into question the reliability of the New York State testing system," teachers union President Randi Weingarten said. "When everything is so high-stakes, you have to be doubly, triply, quadruply sure of the accuracy of the data."

According to the Daily News, however, Klein touted the performance of black 4th graders in math relative to the same populations in other urban areas.