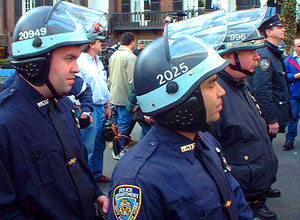 The city spent five years and an estimated $1 million, give or take, fighting off a lawsuit brought by a group of 52 activists who were arrested en masse during an Iraq war protest in April 2003 outside the offices of the Carlyle Group, an investment firm with ties to the Bush family and major holdings in the military-defense sector. And that “bonfire of legal expenses,” as the Times puts it, is just the cherry on top of the $2,007,000 settlement that will now be paid by the city to end the suit.

Though the NYPD insists that the protesters where blocking a Midtown sidewalk during the demonstration, videos from that day (including one taken by the NYPD) show a different scene, with protestors lined along the sidewalk – with ample space for pedestrians – being arrested without any police warning or opportunity to leave. Charges against fifty of the activists were dismissed; two were acquitted. Ahmad Shirazi, a 70-year-old film editor, vividly describes the incident:

“All of a sudden, from the Fifth Avenue side, a huge number of police officers entered 56th Street. The protest was on the south side of the street. We were standing on the north side of the street. They came directly to us, they were in riot gear, and they surrounded us. They made a semicircle around us, shoulder to shoulder, with their batons.” Mr. Shirazi said that as he was being handcuffed for the first time in his life, he told the officer that the plastic cuffs were squeezing him. “He said, ‘You should have thought about that before you came out this morning.’ It was like a dagger in my heart, that a police officer of my city would come up with anything like that.”

arrestees will get about $18,000 each after legal fees. And their lawyers point out that the police tactics used that day – indiscriminately rounding up demonstrators and detaining them for over 24 hours while “processing” them – became the model used by the NYPD during the 2004 Republican National Convention held in New York; those lawsuits are still winding their way through the courts.

Sarah Kunstler, an attorney and filmmaker who is the daughter of the late William Kunstler and was also arrested that day, says, “We hope our victory helps convince the city to stop violating people's rights as a matter of policy and stop wasting taxpayers' money doing so.” But the NYPD is currently consulting with police departments in Denver and Minneapolis on their plans for the 2008 Democratic and Republican Conventions. And a lawyer for the city maintains the NYPD did nothing wrong: “This settlement was reached without any admission of liability on behalf of the city and the individual defendants.”

#carlyle group
#demonstration
#iraq
#lawsuit
#new york
#protest
#settlement
Do you know the scoop? Comment below or Send us a Tip