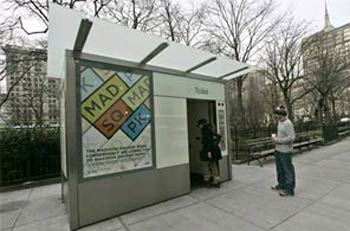 Seven months in and the Automated Public Toilet experiment in Madison Square Park has been little but a smashing success. The NY Times reports that the only problem has been just how badly people want to get into the toilet with traditional pounding on the door doing more to hurry people along than the APT's acoustic alarm and red flashing lights that go off for three minutes after you've been inside for twelve.

Now the city and Cemusa, the private company that has been contracted to operate the "street furniture," are planning phase two of the APT program and will open up four new toilets in Brooklyn and Queens (including one in Flushing) over the next few months. This will be a bigger test for the toilets as they head into neighborhoods not as tourist-friendly and heavily trafficked as Madison Square Park. A hot dog vendor near one of the new proposed spots under the elevated JMZ train on Marcus Garvey Avenue and Broadway in Brooklyn tells the Times, “There’s no respect here. The neighborhood is not good for that type of thing.”

While the APT in Madison Square Park was found to be in "near-pristine condition," the same can't be said for outside the toilet where earlier this week a woman was spotted saving the quarter it costs to get in and making a deposit of another sort.

#apt
#madison square park
#public toilet
Do you know the scoop? Comment below or Send us a Tip