The NYC Department of Homeless Services said in a statement late Monday afternoon that it has tabled a plan to convert a Holiday Inn Express in Maspeth, Queens into a new 110-bed homeless shelter for families with adult children. Instead, a spokeswoman said, DHS will rent out 30 rooms in the hotel, located at 59-40 55th Road, to house homeless employed men. The city began moving men into the hotel today. It would not confirm how long they will reside there.

"Due to local opposition to housing homeless New Yorkers, we have not been able to convert this site into a full shelter at this time," said DHS spokeswoman Lauren Gray. "We are renting rooms for employed single adults and providing onsite services and security."

The shelter was presented to the community in August, prompting near-nightly protests, a threatened lawsuit from locals and an actual lawsuit filed by elected officials. Last month, hundreds of Maspeth residents turned their backs on DHS Commissioner Steven Banks at the second of two raucous public hearings on the shelter, which they have claimed would impact their safety and quality of life.

"Commissioner, you have a legal and moral obligation to the taxpayers," said Maspeth resident Manuel Caruana at one of the meetings. "Not to the homeless."

"It will destroy this neighborhood, as these shelters have destroyed every community they've been built in," added one 72-year-old Maspeth resident. "It's prostitution followed by drugs followed by stealing, break-ins, [and] car break-ins. It's just a way of life."

DHS has argued that it needs to distribute shelters across that city, and that contrary to residents’ claims, homeless New Yorkers aren’t simply outsiders—there are 243 homeless New Yorkers whose last listed address was in Maspeth. Homelessness in New York City as a whole just hit a record high. 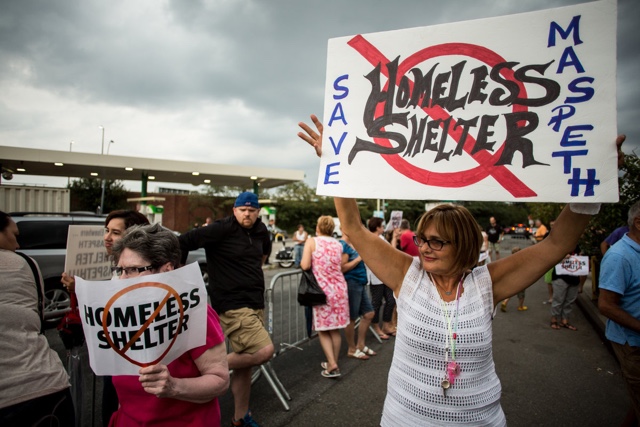 Mayor de Blasio's office has also made the case in recent months that creating a new shelter in place of a hotel, rather than renting out some of the hotel rooms on a short-term basis, would help meet the administration's goal of phasing out cluster site housing and other temporary shelter beds.

Last fall, following the triple stabbing murder of a mother and two of her three small children in a Staten Island motel serving homeless families, Mayor de Blasio pledged to phase out the practice of renting out hotel rooms as temporary shelter for the homeless "as quickly as possible."

"This administration has committed to housing homeless New Yorkers and diminishing reliance on hotels and cluster spaces," mayoral spokeswoman Aja Worthy-Davis said over the summer.

Robert Holden, president of the Juniper Park Civic Association in Maspeth, has spearheaded many of the shelter protests, and said Monday that he had no doubt that the city would still try to move forward with a full shelter at the Holiday Inn Express site.

"We heard the news this morning," he said. "They were doing it yesterday [moving men into the hotel], we heard. For the city to say, 'because of community opposition' is ridiculous."

Some locals posting to a public Facebook group called Maspeth 11378 said they saw the city moving individuals into the hotel this afternoon.

"This is the transparent administration that de Blasio talks about," Holden added. "It's a holiday [Columbus Day] they are doing it on. But we are going to fight. We knew they would try this."

Holden is expecting a larger turnout than usual at tonight's protest outside the hotel, which will start around 7:00 p.m. His group raised $13,500 over the weekend, he said, and will use it to charter buses in the coming weeks—to protest at Gracie Mansion and the home of hotel owner Harshad Patel, who told Pix11 last month that he had "decided not to go against the community" by opening a shelter.

"It will be a shelter," Holden said. "So when they do make it a full blown shelter, we'll do what we said we were going to do: we'll bring out a thousand people."

#dhs
#Holiday Inn Express
#homeless shelter
#maspeth
#shelter
#original
Do you know the scoop? Comment below or Send us a Tip