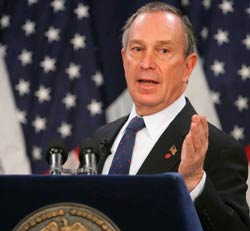 Yesterday, weather apparently prevented Mayor Bloomberg from giving a speech at the NAACP convention in Cleveland yesterday, but, in his place, Deputy Mayor Linda Gibbs said the city found 23% of NYC residents are living in poverty, above the 19% the U.S. Census Bureau found.

The city's numbers are higher because the Bloomberg administration opted to use a different measure taking into account NYC's high living expenses. For instance, the federal formula doesn't include things like housing, child care, and clothing in its calculations. The federal formula uses $20,444 for a family of four as the cut-off, while the city's formula uses $25,138 for a family of four. The city will use its findings to "recalculate the distribution of certain city benefits"

Bloomberg's prepared text had him remarking, "So in Washington, while there's a never-ending debate about how to confront poverty, there is hardly any clarity on who is actually poor. I spent most of my career in the private sector, and I'm a big believer in the saying, 'If you can't measure it, you can't manage it." The city wants to share its model with other cities in order to spur changes in how poverty is measured.