The crumbling 1.5 mile stretch of the Brooklyn Queens Expressway that wraps around Downtown Brooklyn may not be in need of emergency repairs, but representatives of the Department of Transportation said Tuesday that a combination of eroding concrete, leaky joints, and corroding rebar are proof the city needs to be proactive or face emergency repair work and gridlock across the neighborhood a decade from now.

"The structures have been out there some 60-odd years and are starting to show their long life now, and we're going to need to start planning," said project manager Tanvi Pandya.

"In 10-to-12 years, if we haven't done anything real, we will be doing an emergency closure and we will be turning the neighborhood into a parking lot," she added. "This is exactly why we are starting the process now so before we get to that point, we'll have a solution."

Central to this waterfront stretch of the BQE is the triple cantilever. Topped with the Brooklyn Heights Promenade, the steel and concrete structure supports three lanes of Queens-bound traffic, which jut over three lanes of Staten Island bound traffic. These, in turn, jut over Furman Street. Designed by Robert Moses and constructed in 1948, the network of roadways has already surpassed its intended 50 year lifespan by more than a decade.

"I have done a lot of traveling. I have never seen a triple cantilever anywhere else," said DOT Deputy Bridges Commissioner Robert Collyer. "So this is going to be a very challenging process."

DOT Commissioner Polly Trottenberg was more blunt this summer. “It’s a horrible, crappy roadway," she said. "I wish it had never been built."

The DOT revealed this spring that rehabilitation work likely won't begin until at least 2021 and won't be complete until at least 2025, possibly as late as 2029. Tests performed this summer did nothing to move that timeline up, community members learned Tuesday, despite clear evidence of degeneration that will only be exacerbated by winters of freeze and melt. "There are no immediate safety concerns," Pandya said. "The bigger concern is the durability. It's like an old car. At some point you're putting in more than it's worth."

After measuring cracks and testing chloride levels (the corrosive residue left by road salt) the DOT found that the majority of the test area is more structurally sound than expected. Some issues have been deemed simply aesthetically unpleasing, while others are considered hazardous to pedestrians crossing below. For example, under the concrete archways in DUMBO, "When you look up from underneath you can see the mesh to protect the pedestrians underneath is corroding," Pandya said. "A little concrete might fall, but that's not a structural issue." 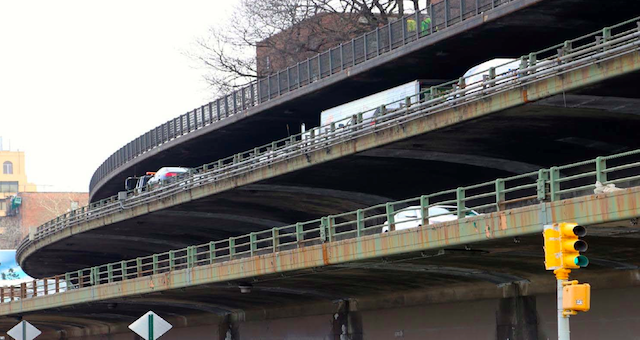 The BQE rehab project hit a major snag in 2011, when the State Department of Transportation backed out. While the DOT is counting on $1.7 billion in city funds over the next decade, officials said Tuesday that additional state and federal funding is needed.

"The state worked on it in the '90s, they worked on it in the 2000s, and then they stopped in 2011," Collyer said. "Basically, in 2008 we had a big downturn in the economy and a lot of funding got pulled out both from our budget and their budget. They then looked through their entire program and felt that this project didn't have the same, I guess you call it, urgency, as the Cross Bronx Expressway and the Major Deegan."

Before the state ducked, officials were considering the possibility of a new tunnel from the waterfront to North Brooklyn: a replacement roadway out of sight and mind for local residents. Now the city is calling that option prohibitively expensive.

Sam "Gridlock" Schwartz, who served as the DOT's Chief Engineer in the 1990s, has said that he believes the cantilever situation is dire. The average daily traffic on the BQE is more than 160,000 vehicles. Of that total, an estimated 11 percent are trucks. "There is no other truck route through Brooklyn," Schwartz told DNAInfo this spring. "Those trucks could end up on Brooklyn Heights streets and that's a real worry."

Pandya promised on Tuesday that the DOT will keep traffic moving for the duration of construction, but insisted that it was too early to determine how this would be achieved. "We are definitely keeping three lanes of traffic open in both directions at all times," she said. "We just have to figure out how we're going to do it." One option is a temporary, parallel structure supporting three lanes of traffic, jutting out over Furman Street. Another, somewhat contradictory, is weekend closures.

"We can keep putting bandaids on it, but at some point we're going to have to bite the bullet," Pandya said. "It doesn't make sense to do minor repairs and keep our fingers crossed."

The DOT says it's close to securing a consultant for the project, and is hoping to start the environmental review process next spring. A preliminary design is targeted for completion in 2019, with construction starting a few years later.

#bqe
#brooklyn heights
#corroding
#crumbling
#triple cantilever
#original
Do you know the scoop? Comment below or Send us a Tip
A new Gothamist is coming! We’ve moved comments over to our beta site. Click here to join the conversation and get a preview of our new website.