City Says It 'Will Not Back Down' Amid Botched Shelter Deals

Department of Homeless Services Commissioner Steve Banks told reporters on Tuesday afternoon that DHS dropped its controversial plan to convert a Holiday Inn Express in Maspeth, Queens into a 110-bed homeless shelter because the owner of the hotel refused to go forward with a full facility conversion. Instead, the hotel agreed to rent out 30 of its rooms to the city to use as shelter beds for employed homeless men. Banks argued that the alternate plan is not a concession to vocal and persistent protesters.

"The property owner would not permit us to go forward with our full plan to use the full building," he added. "If additional rooms do become available we'll move forward with that plan, but we wanted to make sure that last night, as the weather was getting cold, we were able to provide shelter to some 30 homeless workers who needed a place to stay for the night."

He would not confirm whether the city is actively pursuing an alternate shelter site in Maspeth.

In September, Holiday Inn Express co-owner Harshad Patel told reporters that continual protests outside the hotel were hurting his business, and that he would "not go against the community" by converting the facility at 59-40 55th Road into a shelter. In a similar triumph of community opposition, Banks confirmed Tuesday that owners of the Bellerose Inn in Bellerose, Queens—which until recently rented out 40 of its 43 rooms to DHS to house homeless families—has also backed out of its DHS agreement. Patel reportedly owns both hotels, as well as a Quality Inn in Bellerose that houses homeless individuals and plans to cease doing so.

"There were protesters outside [the Bellerose Inn] chanting that that particular shelter should be shut down, and ultimately the hotel owner made a determination to not continue to rent those rooms," Banks said. "That solved absolutely nothing because those families had to be housed elsewhere in the city. And I don't think any New Yorker would want to see someone denied shelter because a particular group of people said 'Not in our community.'" 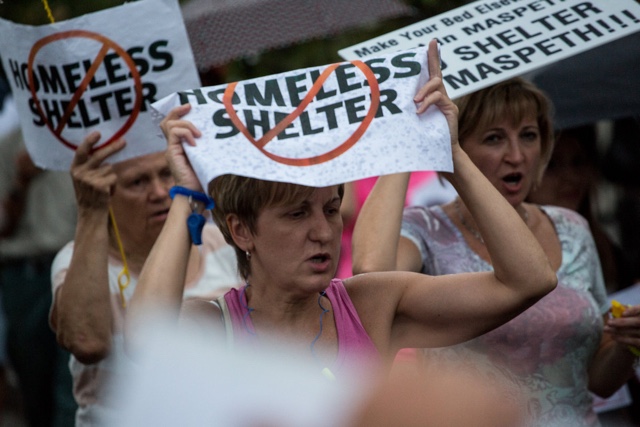 Throughout the thirty-minute press briefing, Commissioner Banks alluded to the difficulty his office faces in meeting its "legal and moral" obligation to house all New Yorkers in need of shelter, in the face of hostile opposition.

According to DHS, there are currently 6,000 homeless New Yorkers living in commercial hotel rooms. Last fall, following the triple stabbing murder of a mother and two of her small children in a Staten Island motel serving homeless families, Mayor de Blasio pledged to phase out the practice of renting out hotel rooms as temporary shelter for the homeless "as quickly as possible."

"Phase-out of commercial hotels was part of 46 reforms that we announced five months ago," Banks said when asked to comment on their continued use. He declined to confirm the number of hotels currently renting rooms to DHS (Pix11 reports that there are 70).

At Monday night's protest outside of the Holiday Inn Express, Maspeth residents accused the de Blasio administration of placing homeless men in a facility without kitchens or adequate case support, at tax payers' expense.

Banks confirmed on Tuesday that the city is paying $160 per night, per room, to rent out the Holiday Inn Express. He added that additional costs per-individual—for food and casework services—are still being calculated. The city is also providing a shuttle service from the hotel to the closest public transportation, as well as 24-hour security.

Last week, Mayor de Blasio told reporters that he had no patience for the protests in Maspeth, led by locals who fear a shelter will diminish their quality of life, and safety. "I've told them I welcome their pickets as many times as they want because I will happily stare them down," he said. "We are going to put a roof over people's heads."

Reporters asked Tuesday if Banks feared the Maspeth decision in the wake of protests, in combination with the newly-reduced homeless services in Bellerose, would set an example for other communities looking to protest proposed shelters.

"The fact that we placed [30 men] there last night is a testament to our resolve," Banks said, adding, "The city will not back down."

DHS originally planned to place homeless people from Queens Community Board 5 in the Maspeth facility, in order to keep them close to their last known address. This was not achieved on Monday.

More than 100 Maspeth residents said Monday that they will continue to fight back against the placement of any homeless individuals in the Holiday Inn Express.