City Says Good-Bye to Another Firefighter 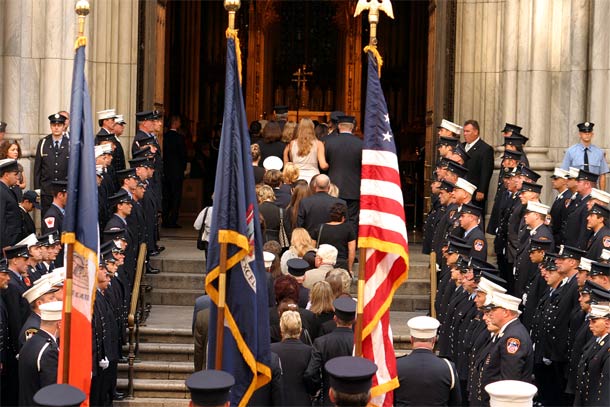 Firefighters and elected officials were at St. Patrick's Cathedral yesterday for the second funeral of a firefighter killed while fighting last Saturday's Deutsche Bank building fire. Twenty-three FDNY veteran Robert Beddia was remembered by his sister, who eulogized, "You are my friend, you are my brother, you are my hero... Remember those days of playing chess, Risk and Monopoly? Remember how many of my high school friends had secret crushes on you? Remember when you walked me down the aisle? Remember when you danced with me on my wedding day?"

As the city and state agencies face many tough questions about how the dismantling and inspection of the WTC-dust contaminated Deutsche Bank building was handled, officials promised answers. Fire Commissioner, whose resignation has been demanded by the Post, said, "We will continue to conduct an aggressive, comprehensive investigation and will follow it wherever it takes us."

Still, in the hindsight is 20/20 vein, the complicated dismantling project seemed doomed. An employee of fired-subcontractor John Galt told the Post, "Whenever an inspector would arrive, you could hear them on the radio saying, 'There is a cat in the building. There is a cat in the building.' It was like a game of cat and mouse. Then we would have to clean up the area where we weren't supposed to be working. Whenever the inspectors would leave, we would just operate like we used to." Further, the NY Times reports that the City's Department of Investigation "strongly cautioned Lower Manhattan development officials against using" John Galt for the job, but the LMDC decided to anyway.

On Thursday, two firefighters inspecting the Deutsche Bank site were injured when a John Galt worker dropped a 300-pound piece of equipment. One firefighter was released after a day in the hospital while the other will remain for many more days - he needed 100 stitches to close up the wounds he suffered. An angry FDNY official said of the subcontractor, "We're doing escort duty there. We're baby-sitting a construction company that's run by the Three Stooges."

Beddia was buried at Moravian Cemetery in Staten Island, where slain police officer Russell Timoshenko is buried. The officer's parents had attended Beddia's wake "in a show of solidarity." Beddia's Engine 24, Ladder 5 colleague Joseph Graffagnino who died during the same blaze was buried on Thursday.