The New York City Housing Authority [NYCHA] has released specific details about its plan to lease land at eight public housing projects to private developers. NYCHA's plan—which in its current form would add 4,330 luxury apartments in eight developments—sparked controversy in February after public housing tenants said the news caught them off guard. The city maintains that the new buildings would go up on "underutilized land," while tenants and housing advocates say they aren't willing to sacrifice their parks, playgrounds, and basketball courts for private developers. 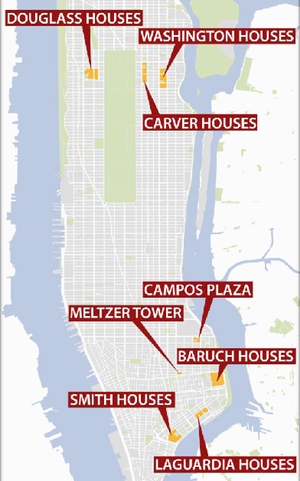 Next month the city will issue a Request for Proposals for all eight developments. The chosen developers will win 99-year leases with frozen payments for the first 35 years. (20 percent of their units will have to be rented as "affordable" for families of four that make $50,000 or less.) These diagrams show you where the new residential buildings would go, and what they would replace. NYCHA has been quick to stress that impacted areas will be replaced or reconfigured, and current parking permit holders will not lose parking spots.

On Thursday night Fred Harris, NYCHA's Executive Vice President for Development, was scheduled to appear before Community Board 3 but he postponed the appearance until next month. That meeting will now take place about a week before NYCHA issues the RFPs, and opponents of the plan are taking that as a signal that NYCHA is going to go through with it no matter how strenuously they object. "It says that they're going ahead on their merry way," Community Board member Lisa Kaplan tells the Times.

Instead of meeting with CB 3, Harris was presenting the plan to tenants of the Baruch Houses, New York's largest public housing complex. According to the Lo-Down, "speaker after speaker blasted N.Y.C.H.A. for mismanagement, for deceiving residents about past plans and for failing to take care of Baruch, a complex that opened in 1954." One woman declared, "This is not fair. You can’t even take care of us. There aren’t even benches for seniors to sit on. How are you going to deal with a whole new building?”

Affordable housing advocates are also worried that this proposal will be the first step in chipping away at NYC public housing. But responding to a concerned letter from State Assemblyman Brian Kavanagh, Mayor Bloomberg argued that NYC's public housing system "has more than $6 billion in unmet capital needs, which are projected to increase to $13.4 billion over the next five years." The mayor estimates that the plan will generate $500 million in capital funding.

#nycha
Do you know the scoop? Comment below or Send us a Tip