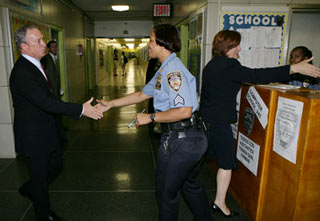 While the jury is still out on whether Mayor Bloomberg's improvements to the public school system have really worked, he, along with City Council Speaker Christine Quinn and School Chancellor Joel Klein, announced new initiatives to help middle schools improve academic performance and provide better resources for students, parents, and teachers alike - plus $5 million to fund them. The money will go to the 50 lowest-performing middle schools, so they can staff up with guidance counselors, offer mentoring programs to less experienced supervisors, and offer Regents-level classes.

Mayor Bloomberg said middle school is "where many students begin to lose their footing." Teachers union president Randi Weingarten supports the plan; per the Politicker, she siad, "Let's make this real. Let's turn around our middle schools."

However some would like even more dramatic reforms. For instance, why didn't the Mayor take the task force's suggestion of reducing class size to heart? City Councilman Michael McMahon of Staten Island thinks there should be more to address discipline issues, suggesting a "Marshall Plan approach" to safety and discipline. And a teacher writing on the Huffington Post, Dan Brown, believes that the test-driven learning culture of students makes them uninterested once the tests are over. And the Wonkster wonders if Quinn went ahead with the Mayor's middle school plan to aid her mayoral aspirations.