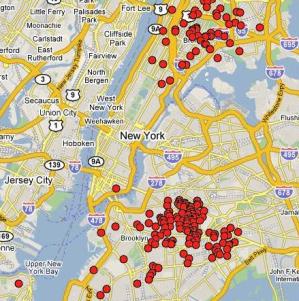 The Department of Housing Preservation and Development has compiled a list of the city's 200 most poorly maintained buildings and has told the owners they must be repaired in 4 months. Or else, the NY Times reports, the city will be able to overhaul them and force the owners to pay.

On November 11, a Local Law No. 29, the Alternative Enforcement Program, went into affect to help the HPD to "enforce the correction of housing maintenance conditions in distressed multiple dwellings" (these do not include two-family houses). Each year the HPD will identify the worst buildings, and not only will the owners be charged for repairs that the city makes, they will be subject to fines.

The NY Times reports that 132 of the buildings are in Brooklyn and 52 are in the Bronx and also has an interactive map of all the building locations. One building at 1055 University Avenue in the Bronx has 1,413 violations, while a resident at 531 Knickerbocker Avenue in Brooklyn said her refrigerator was removed months ago and that she "used to boil water to take a bath, but had to use an electric burner because her unit had not been getting gas." One landlord, however, blamed residents for not paying rent.

You can learn more about the AEP here.