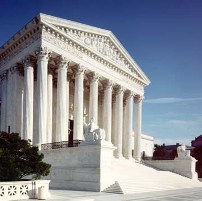 The Supreme Court essentially upheld an Appeals Court ruling that said New York City must pay the private education of disabled students. The twist is that the students and their parents don't even need to try to see if the public school programs are adequate for them.

Actually, there's another twist: The lawsuit against the city was filed by former Viacom CEO and co-founder of MTV, multimillionaire Tom Freston. Freston's son Gilbert has learning disabilities, and, even though he earned a "coveted spot at the Lower Laboratory School for Gifted Education," Freston opted to send him to a smaller private school. He eventually won tuition reimbursement from the Board of Education, which then sued Freston, but later the Second Circuit Court agreed with him.

The city had tried to argue, "You can't just say, 'I have no interest in sending my kid to a public school and I'm just going to ask the school district to pay.' The statute requires that you work with the schools." The justices voted 4-4, with Justice Kennedy recusing himself. Mayor Bloomberg explained the lawsuit, "They just decided their kid needed private schools and never sent their child to public schools and just sent us a bill. We thought that that was not appropriate, that the city can't afford to send every child to private school."

Freston had said before the ruling that he was fighting for the principle of the matter. The NY Times reports that Freston says he's donated the tuition reimbursements to tutoring programs for public school children. According to the Daily News, Freston is "thrilled" and wanted to "ensure that our government, as a matter of public policy, fulfills its obligations to families by ensuring they have access to suitable special education programs."

The city is concerned because more and more families are applying for tuition reimbursement and it may cost the city millions more. The NY Sun has an editorial blasting the decision.