City Murders on Track to Record Low in '07 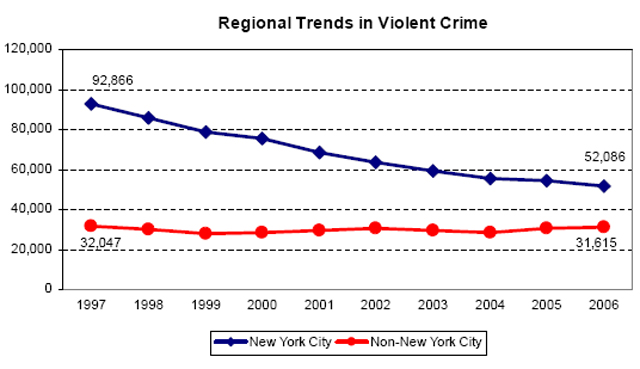 Official crime statistics recorded by the city this year indicate that New York is on track to record fewer than 500 murders in 2007, the lowest number since reliable statistics began to be recorded in 1963. The trends recorded thus far this year, show that murders by strangers are also down dramatically.

So far, there have only been 428 murders recorded in 2007––412 killings and 16 people who succumbed to injuries sustained earlier. According to the New York Times, the number of murders committed by a stranger against a stranger––like in a mugging or random violence––could drop to as little as 100 for the year. That is a phenomenally small number in a city of 8.25 million people. The department has been on to the trend since the first quarter of 2007, when it noticed that murders were down during the first quarter.

Criminologists believe that the city will be hard pressed to continue to reduce the rate of murders from such a low point, because the vast majority of them are being committed by family members, friends, co-workers, and other familiar people. Cops would have to be omnipresent to prevent such crimes.

The figures above were taken from the final 2006 Crime & Justice Analysis for New York State report. One can see a pattern of decline that is a continuation of an even more serious drop in murders that began in the early 1990s. Those reductions began with the institution of policies under Police Commissioner Ray Kelly, who then served in the Dinkins administration.