Upper West Side parents who live near two of the most coveted public elementary schools in Manhattan—PS 199 on West 70th Street and PS 452 on West 77th Street—learned Wednesday night that the city's plan to alleviate school crowding and increase student diversity incorporates new zone lines and a school relocation many of them have adamantly protested for months.

"For some folks, the things we hear tonight are going to seem like another blow on an already crappy day," said Joe Fiordaliso, president of the Community Education Council (CEC) that will vote on the proposal later this month. "So I would ask everyone to listen to each other and control your emotions."

One major tenet of the plan involves moving PS 452 sixteen blocks south to a larger campus near the NYCHA-run Amsterdam Houses—lengthening commute times for many families. Another involves moving two of the buildings in the sprawling Lincoln Towers co-op community from PS 199—ranked as one of the nation's top schools in 2013—to PS 191, a school with historically low test scores and, until recently, a contested "persistently dangerous" state ranking. PS 191, in turn, would move to a new campus at the nearby Riverside Center, a luxury residential high-rise.

Over the summer, PS 452 members came out in force. "You vastly underestimated the massive life and financial choices we made to attend this school," one parent told the DOE in June.

"452 is the luckiest thing that ever happened to my family," parent Heather Tait countered on Wednesday. "I would follow [it] to the moon."

But PS 452 parent Rachel Brody said Wednesday that she has already made alternative arrangements. The mother of a kindergartener, she said her daughter attended PS 191, but left when the state deemed it persistently dangerous. She has no intention of going back. "We're going to Catholic School," she said. "And I'm Jewish, so I'm really not happy. We already have the paperwork."

"I'd say about right now, 90% of the families aren't going [to move]," she added. "We're not happy. People are looking at private school. People are actually considering moving to the suburbs. That's how bad this has become."

Allegations that the entire rezoning process was a "sham" and "rigged" were met with cheers from the audience.

@katetaylornyt To clarify, she said this was the *only* time she would ever agree with Trump.

The DOE has said that rezoning is crucial in Manhattan's District 3. A recent analysis from the New School shows that District 3 is one of the most segregated districts in a city recognized nationally for its school segregation. On the Upper West Side, NYCHA-run housing complexes share the skyline with an increasing number of new high-rises. Real estate developers push these rentals on the merits of local high-performing public schools. As a result, predominantly white and upper-middle-class public schools have grappled with some of the longest waiting lists in the city.

Leah Savitt, a resident of one of the impacted Lincoln Towers buildings, has collected thousands of signatures opposing the rezoning. "[We] were somehow blamed for holding back diversity because we raised our voices at this meeting and at a succession of meetings," she said. "Nothing could be further from the truth. We welcome diversity, we live diversity." 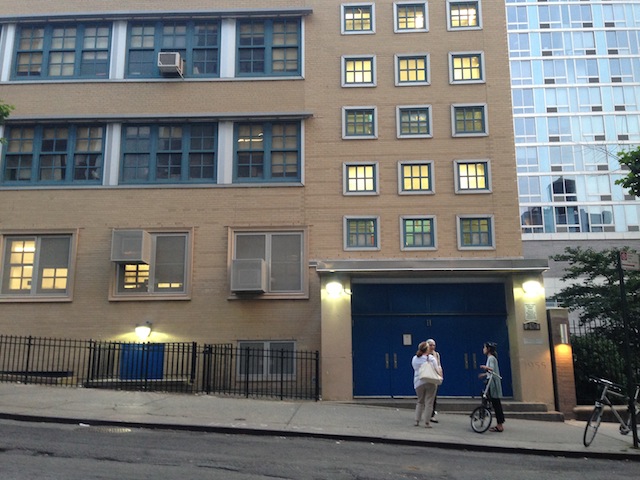 Some parents have said they won't travel downtown to PS 191 if the rezoning goes through (Emma Whitford / Gothamist).

"This proposal gets at persisting issues around overcrowding and segregation," said DOE Chancellor Carmen Fariña in a statement this week.

But CEC members have countered that the DOE's efforts to increase diversity exclude the northern portion of District 3 located between 110th Street and 124th Street. In Harlem, overcrowding is not the issue. Instead schools grapple with under-enrollment, a lack of resources, and the encroachment of charter schools.

During Wednesday's meeting, the DOE presented a plan to consolidate two schools in the northern part of the district. PS 241 on West 113th Street, which currently shares its building with a Success Academy charter school, would move into the PS 76 building on West 121st Street. The plan, presented Wednesday for the first time, is expected to go up for vote this month—alongside, though not contingent on, the PS 452 and PS 199 plan.

The DOE said last month that it is just now "starting to schedule... engagement meetings with the community"in Harlem—a stark contrast to the year-and-a-half debate on the Upper West Side.

Viola Pajan, a PS 241 parent, said Wednesday the school had urged parents to attend the meeting to learn more. She speaks Spanish, so her son, Osvaldo, translated. Parents had been given "no explanation," she said.

Meanwhile, the DOE has promised PS 191 a brand new building, as well as a new Gifted & Talented program. "I'm not seeing that same parity in the northern part of the district," said CEC member Dennis Morgan, adding, "We need an opportunity to put some of those [special programs] in place because that's going to help with the [lack of] diversity."

Sarah Turchin, who directs the DOE's zone planning for Manhattan, said that consolidating two Harlem schools would alleviate "budgetary and programatic challenges"—that increasing diversity wasn't the goal, though the DOE will "continue having those conversations."

The CEC plans to vote on both rezoning proposals on November 22nd, with final public comment sessions in the coming weeks.

"We have not figured out how to [address] that yet," she added, pledging to hold meetings with Harlem parents starting in December. "The next step is truly the real work."