According to City Hall, the administration has created or preserved a combined 52,936 units of affordable housing since the plan's launch in 2014. The mayor's goal of 200,000 affordable units by the year 2024 only calls for 50,000 units at this stage.

"Many people in the housing development and real estate fields in New York and nationally thought [this] was a fairly crazy and overly ambitious goal," Glen said on Tuesday. (Mayor de Blasio himself was absent, having traveled to Philadelphia for the Democratic Convention.)

Advocates have argued that these numbers represent too little too late. Before Mayor de Blasio's housing plan was implemented, the city was short 550,000 affordable apartments for families that make less than $42,000 per year. For that income group, the plan calls for 16,000 new apartments, or less than 3% of the need. Meanwhile, NYC's population is booming. And thanks to loopholes in the existing rent laws, the Alliance for Tenant Power estimates that the city could lose 100,000 affordable units by 2019.

The majority of the new or preserved units are in Manhattan—16,935 of them, followed by 16,507 in Brooklyn. According to HPD, they're concentrated in neighborhoods including East Harlem, Brownsville in Brooklyn, and Highbridge and Belmont in the Bronx.

Here's the breakdown, by affordability:

The preservation process does not insure permanent affordability—when a building is "preserved," its owner receives a cocktail of loans and tax breaks that expire after between 15 and 30 years, taking any affordability requirements with them.

In the case of Stuy Town, the city helped finance a deal between the complex's then-owners and Blackstone Group, a massive international investment firm that manages some $93 billion in properties. Ultimately, Blackstone agreed to preserve the relatively affordable rents of 5,000 of the complex's regulated units. In exchange, the investor was guaranteed one million square feet of extremely valuable air rights.

For city officials, Stuy Town is proof of the success of a housing plan that hinges on private investment.

"Some people would have said, 'What are you doing? Why are you in the middle of private market transactions? That's not the role of the government.'" Glen said on Tuesday. "We were very clear when we came into office that we were going to be strategic and [intervene] where we could."

"Blackstone is a notorious private equity company that is going to... be making money hand over fist," argued Cea Weaver, research and policy director for New York Communities For Change, a coalition of housing advocates for low-income New Yorkers. "The more we go down this path, the more we're empowering private investors to control a public resource."

Reporters pointed out this week that, less Stuy Town and Riverton, the city actually preserved fewer affordable units than it did last year.

Glen said that while there aren't projects the size of Stuy Town in the pipeline, the city will "work harder" in order to achieve similar numbers in the future. 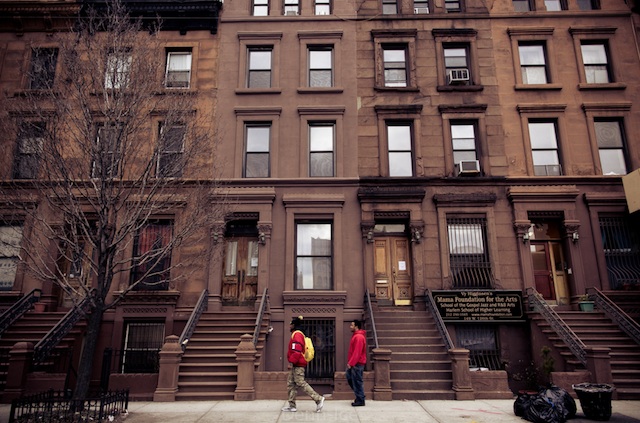 Vicki Been, head of the city's Housing and Preservation Development (HPD), emphasized today that 25% of the units produced to date, 12,970 of the total, are set aside for New Yorkers who make less than 50% of the Area Median Income, or $40,800 for a family of three. Of that total, 6,817 are set aside for extremely low income families, those that make less than $24,000 per year.

"These are the very hardest units to produce," she said.

For context, a full third of the city's households have an annual income of less than $35,000.

The Mayor's team indicated Tuesday that it is doing the best it can under the circumstances. "Land and construction costs [are high]," Glen said. "We don't have a gazillion city-owned buildings to put into the sausage maker. We have to be much more creative and work with the private sector."

At the moment, there are no plans to develop deeper city subsidies for the constriction of affordable housing.

"The fact that developers continue to want to do business with us and are able to make their margins work given where the subsidies are, generally speaking we don't have to raise subsidy levels right now," Glen added.

Advocates have argued that the city could do a better job of documenting and assessing the vacant properties already in its control, which might be converted to deeply affordable housing at a lower cost. This spring, HPD confirmed 897 vacant apartment units in just one city-owned housing program. In 2012, the advocacy group Picture the Homeless counted more than 3,500 vacant buildings across the five boroughs.

Asked if the city had plans to count and assess all of its vacant properties, Been said it did not.

"When my inspectors are on the ground they're always looking for signs of vacancy, and then... we reach out to the owner and try to understand what is going on," she said. "The city does not have a registry of vacant property, but we monitor it very carefully."