To address New Yorkers' evolving housing needs, and create an alternative to the thousands of illegally subdivided apartments in NYC, Mayor Bloomberg announced today a competition to design a new apartment layout. And he's thinking small. Like 300 square feet. 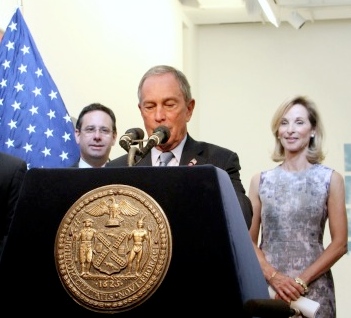 The adAPT NYC Competition involves a Request for Proposals from the private sector for a rental building composed of micro-units (apartments under the city's current size restriction of 450 square feet), and is an experiment in innovative and imaginative design to create more affordable housing for the city's growing population of 1-2 person households. Bloomberg will waive certain zoning regulations at a city-owned building at 335 East 27th Street in the Kip's Bay neighborhood of Manhattan to test the market for the new housing model. The proposals will be judged on the treatment of light, space, accessibility, and use of shared space. A winner will be announced by the end of the year and the new design will be put on display at the Museum of the City of New York.

20% of the complex will be income restricted, and the remaining non-regulated apartments will be rent stabilized. There will be no rent subsidy— instead the creators of the project hope to "let the market work and see what happens." An exact rental price cannot be determined at this time, because one of the goals of the pilot program is to see how entries address this aspect, but the apartments are slated to fall under the typical price point of a comparable studio apartment. Currently it is illegal to build new apartments less than 450 square feet, but the program will override these regulations, allowing the apartments to be 300 square feet. If successful, the hope is that the program will encourage a much needed update to zoning regulations, allowing for broader housing choices.

76% of New York City's 8.4 million plus population is composed of 1-2 person households, and the city wants to provide the kind of housing that people need so that they don't create it for themselves with illegal and unsafe subdivisions. City Planning Commissioner Amanda Burden, whose agency collaborated with the Department of Housing Preservation and Development on the competition, says the new housing units will be "a way to ensure the city's housing will meet the diverse needs of it's residents."

#apartments
#housing
#mayor bloomberg
#rent
#original
Do you know the scoop? Comment below or Send us a Tip