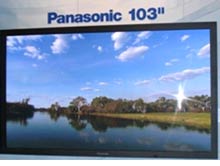 We're thinking that the newly renovated City Hall bullpen would be a great place for MTV Cribs to visit, even if Bloomberg staffers don't have posters of Scarface or The Godfather in their cubes. Because Panasonic has donated a 103" plasma HDTV to the bullpen!

The TV, which retails for $70,000, can show news channels, "311 call statistics and a video feed from NYC TV's live traffic cameras," according to the Post. A Panasonic spokesman said, "Just as this cutting-edge display provides amazingly sharp, crisp video for entertainment purposes, it is also a great way for the city’s leaders to share remote video and other data vital to the safe and secure operation of the city’s systems.” We bet some staffer will be sneaking a Wii to work, though.

The Mayor and his staff decamped to the Office of Emergency Management headquarters in Brooklyn for two weeks while improvements were taking place to their open office space. The highlights include new carpeting, a new IT infrastructure, new phones, new desks ("replacing the previous government-surplus desks installed when the Bullpen was first created," per the press release), repaired leaky and cracked ceilings, and repaired windows. Not bad for the oldest City Hall in the nation.

When the 103" Panasonic TV was unveiled last year, it was believed it would have a niche audience. And it does - billionaire mayors with bullpens! Also, have some fun with numbers: The 103" TV is 55" tall and 95" wide (with the frame and speakers) and weighs 450 pounds; Mayor Bloomberg is about 67" tall.