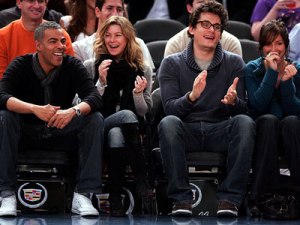 Pompeo, the squinty-eyed- sorta- Renee Zellweger- doppelganger, married her fiance Chris Ivery in a simple ceremony. According to the AP, the only witnesses were Bloomberg and Deputy Mayor Patricia Harris, and a city clerk's office official performed the ceremony last Friday. We hope that the ceremony was uneventful and happy, unlike Pompeo's insane flipout when she was Punk'd.

And Pompeo and Ivery's NYC trip also included a Knicks game, where they sat courtside next to John Mayer and Minka Kelly.

*It turns out Ivery, a record producer, grew up in Medford, Massachusetts, where Bloomberg hails from and they have mutual friends.