City Hall Orders Staffers To Keep Their Mouths Shut Or Else

On April 27th, a few hours before news broke that several of his top aides had been subpoenaed in joint federal and state investigations into his fundraising practices, Mayor Bill de Blasio summoned City Hall employees into the bullpen for what one staffer described as “the most depressing pep talk.”

“He told us that no one is going to thank him for ‘not being dead’ because the homicide rate is down and Vision Zero is working,” the source recounted. “He said we should put our heads down and focus on our good work. He told us that the media will never be on our side.”

To reinforce that final point, scores of City Hall staffers—some of whom have worked for Mayor de Blasio since he came into office—were recently asked to sign a confidentiality agreement. Another source who received the document from their superiors last Thursday said that they were told that all City Hall staff were expected to sign it immediately.

All of the sources Gothamist spoke to requested anonymity and asked that we not name the agencies they work for, for fear of being fired for speaking to reporters, something they say has happened recently after the administration began cracking down on leaks.

“I’ve never heard of anything like this,” one source told us after they received the document. 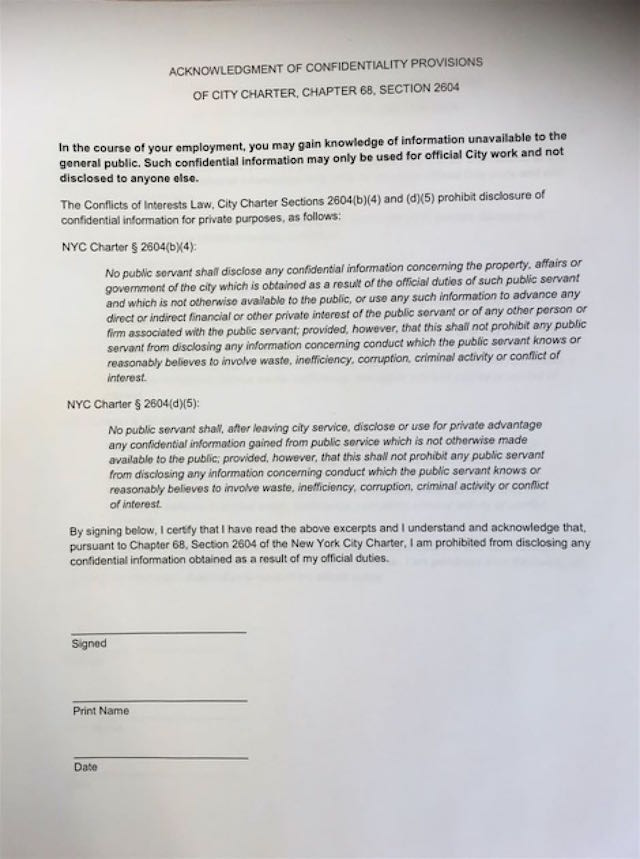 The form itself references two subsections of the city charter that prohibit public servants from disclosing city business unless it involves “conduct which the public servant knows or reasonably believes to involve waste, inefficiency, corruption, criminal activity, or conflict of interest.”

City employees sign a similar document when they are hired, but one former city official who has worked under multiple administrations told us that “there’s no precedent I’ve ever heard of for a second signing like this.”

“Every City employee has to review all of the ethics rules and acknowledge that he or she has reviewed them when they first come on board—this includes Mayor's Office positions, and it has going back at least to Koch,” says the former city official, who asked to remain anonymous for fear of retribution.

“Periodically DOI and COIB remind people, and ask agencies to remind people, about them. But those usually came before the holidays and focused on gifts from vendors or subordinates. There was no focus on leaks.”

The former city official said that they could not remember a single employee who had been fired for leaking information to a reporter.

Karen Hinton, the mayor’s press secretary, declined to specifically comment on our copy of the letter because we refused to disclose its origin, but said that no staffer would be fired for passing it along to a reporter because it is a public document that could be obtained under the state’s Freedom of Information Law.

“All City employees sign a confidentiality agreement when they are hired and when they leave, as has been the case for many years,” Hinton said in a statement. “This is standard practice in both the public and private sectors. Reminders of these and other employment practices are periodically issued by agencies, as they determine to be helpful.”

Hinton would not say whether any members of the administration had been fired for leaking information to the press.

At a press conference on Thursday, Mayor de Blasio again suggested to reporters that the leaking of the State Elections Board report that spurred the investigations into his campaign fundraising practices was a political attack against him. The board employee who leaked the report to a Daily News reporter and a spokesperson for the Republicans in the State Senate had worked as a Republican staffer for 16 years; the author of the report was appointed by Governor Cuomo.

"It was leaked to a particular reporter. I think everyone in this room is a mature adult. I don’t think I need to fill in those blanks too much more," the mayor said. (The reporter in question was Ken Lovett, the Albany bureau chief for the Daily News.)

[UPDATE // 6:00 PM] In a statement, Karen Hinton, the mayor's press secretary, says, "The Mayor’s office has not asked any city employees to sign a confidentiality memo beyond what they signed when hired or when they left the administration."

Asked to clarify the meaning of "Mayor's office," Hinton replied, "Anyone who works physically in City Hall."

With additional reporting from Max Rivlin-Nadler