Until November 2015, a city deed restriction required that the 118-year-old building at 45 Rivington Street remain a nonprofit residential healthcare facility, and for decades, it operated as a nursing home for patients suffering from AIDS. But last year, the building's then-owners paid the city $16.15 million to lift the deed so that they could sell the property to the largest real estate developer in China, who plans to turn into luxury condos. Since then, the deal has become the subject of city, state, and federal probes, as well as community outrage, and today, the city's Department of Investigation announced its findings: that a "complete lack of accountability within City government regarding deed restriction removals and significant communication failures between and within City Hall and The Department of Citywide Administrative Services [DCAS]" were responsible for the Lower East Side's loss of a valuable healthcare facility.

The DOI investigation revealed that, as previously reported via a memo leak, high-level City Hall officials were most certainly aware of the Rivington House deal, despite feigning cluelessness. And despite Mayor de Blasio's previous assertions that he hadn't been made aware of it, it looks like he was looped in at least once, back in 2014.

Senior officials such as First Deputy Mayor Anthony Shorris and DCAS Commissioner Stacey Cumberbatch were notified on multiple occasions about the deed restriction lift, the DOI's investigation found. Specifically, in a May 2015 memo, Cumberbatch informed Shorris that the then-owners of 45 Rivington Street had agreed to pay the city over $16 million to lift the deed restrictions that limited the building's usages. Shorris apparently told DOI that he didn't read Cumberbatch's memos, and that no one flagged the matter for him.

But Shorris was actively aware of the Rivington House deal, the DOI found, because it was he who forwarded de Blasio an email in August 2014 after one of DCAS's monthly meetings, noting that Rivington House had been on the agenda. At that time, the deed restriction change had been requested, but Cumberbatch had said that DCAS wouldn't be removing it "at this time." De Blasio told DOI investigators that he didn't recall receiving that email. 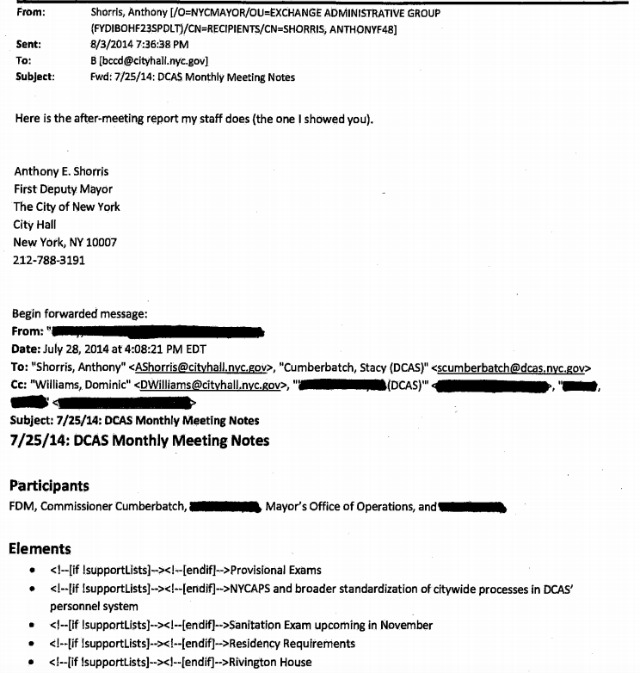 In addition to an apparent lack of competency at checking and reading email, the DOI's report revealed a lack of clear policy and procedures for handling deed restriction changes. DCAS employees told investigators that they would not have backed out of the decision to lift the deed restriction if they'd known the property would be converted into luxury condos, because they were under the impression that DCAS was supposed to make money for the city. Indeed, DOI reviewed an email from Cumberbatch to her DCAS employees, congratulating them for closing the $16 million Rivington House deal.

There's some question still of how clear DCAS was on the intended use of the building, once sold: DOI's report notes that though the then-owners told several DCAS employees that they were considering selling the place to a developer who'd turn it into luxury condos, "there were attempts to conceal some details of the sale." And when the deal was underway, the developers at the Slate Property Group told employees not to discuss the deal, because the building's owners were "concerned that if the City found out about the sale, the deed restriction might not be removed."

And then there's the fact that until less than a week ago, the City had no clear policies in place for evaluating requests for deed restriction removals. Last Friday, the mayor quietly released a set of policy changes aimed at preventing future such flips, and in the future, deed restrictions will only be removed when doing so will advance the administration's policy goals. The city will also be taking the $16 million it made from the Rivington deal and reinvesting it back into the Lower East Side.

DOI made a number of additional recommendations today, including an audit by DCAS of all of its deed restriction changes from the last decade, to see whether there were any similarly questionable dealings there. But neither the DOI's recommendations nor City Hall's policy changes announced last week will undo the Rivington House flip, and LES locals are still fighting to have the building returned to the community. They're petitioning de Blasio to reverse the deed restriction lift, and 1,593 people have signed that petition so far. Kathleen Webster, one of the organizers of the movement to reclaim the building, told us last week that she "would rather they use that $16 million to mount an eminent domain fight or whatever they have to do to return this building to its rightful owners, which is the public," but it doesn't yet seem that City Hall is exploring that avenue.

Comptroller Scott Stringer, who has previously been critical of the Rivington House flip and whose office is investigating the deed restriction lift as well, said today that "the more that’s revealed about the Rivington House deal, the clearer it becomes that the Administration failed on every level of oversight and operations. The City abdicated its responsibility to safeguard our communities and to protect our most vulnerable citizens. This deal was a punch in the gut to the Lower East Side."

City Hall representatives did not respond to repeated requests for comment, but we will update if they do.

Update, 4:52 p.m.: In a statement, City Hall press secretary Eric Phillips said the following: "This report confirms what Mayor de Blasio has already said: the City’s decades-old deed modification process was deeply flawed. These flaws will be changed through a series of sweeping reforms unveiled by the Mayor to ensure this mistake is never repeated. The Administration fully cooperated with the DOI, provided every single document and every single interview requested by the DOI—including a voluntary interview with the Mayor. This review found no evidence that the Mayor knew of any part of this transaction and no evidence that any government official was involved with any illegal or unethical behavior. The report also confirms that Allure took steps to hide from City Hall its true intentions to flip Rivington House into luxury housing. The lessons of Rivington have been tough, but they will result in a better process for the people of New York City—one that will put community benefits and the needs of a neighborhood ahead of a developer’s bottom line.”

#45 rivington street
#City hall
#dcas
#Deed Restrictions
#department of investigation
#Rivington House
#original
Do you know the scoop? Comment below or Send us a Tip