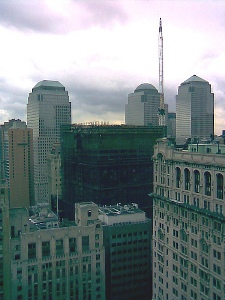 The city has hired a criminal defense lawyer to represent its various agencies who are coming under attack for the Deutsche Bank fire that claimed two firefighters lives. The Manhattan DA's office started a criminal probe, after some disturbing practices by the contractors and questionable omissions by the Fire Department and the Buildings Department came to light. Eventually smoking, by workers hired to help dismantle the WTC-dust contaminated building, was cited as the probable cause of the fire; smoking is prohibited on job sites, especially ones involving hazardous materials such as the Deutsche Bank fire, but more alarmingly, a standpipe (which delivers water to other floors) had been disconnected, making fighting the fire much more difficult.

The city's Office of Corporation Counsel says that law firm Kramer Levin Naftalis and Frankel is "more knowledgeable" (than themselves) and that the Manhattan's DA office has asked for "voluminous" amounts of material. The NY Times calls the hiring of outside counsel "unusual, though not unprecedented," noting that Gary Naftalis is "one of the nation’s leading trial lawyers." And apparently the investigation has made things "tense" between the DA's office and city agencies.

WABC 7 reports that there was another but unreported fire at the Deutsche Bank building weeks before the August 18 tragedy. An EPA inspector found "that netting outside of the building had caught fire from sparks generated from hot cutting," but no one at the site ever called the Fire Department. John Jay College fire science professor Glenn Corbett said, "Had they been notified there was a real likelihood that steps would have been taken to ensure fires didn't occur, there would have been much more scrutiny?"