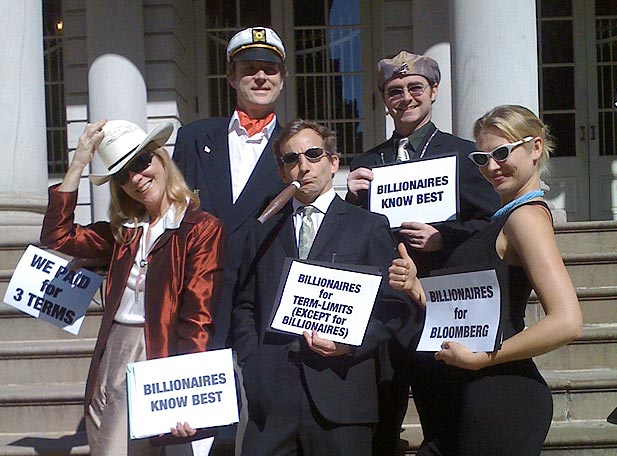 Photograph of Billionaires for Bloomberg at City Hall yesterday

A day after City Council Speaker Christine Quinn officially proclaimed her support to support extending term limits from two to three terms, the backlash and uncertainty continues to grow. Mayor Bloomberg's team has apparently been looking for support from unions and religious leaders. Right now, NY1's count of City Council members says 15 members support it, 18 are opposed, and 18 are undecided (26 votes are needed to pass the bill).

Mayor Bloomberg thinks Quinn's future is bright. The Observer reports that Mayor Bloomberg, earlier this morning, said he believed Quinn would be re-elected "overwhelmingly" in her district and would be speaker again. And: "If she's not re-elected to public office, however, Bloomberg said she would have 'enormous opportunities' in the private sector." Of course, there is that Page Six rumor that Quinn would not be re-elected as speaker: "Rather than go back to being an ordinary council member and have to give up her big staff and SUV, Quinn will leave the council and become a deputy mayor under Bloomberg." Quinn did say yesterday, "In difficult times, I believe voters should have the choice tokeep current leadership. If voters are not happy with any of us, they have the right to vote us out of office next November."

Representative Anthony Weiner, who is hoping to run for Mayor in 2009, is drawing the public's attention to this week's City Council hearing about term limits on Thursday at 1 p.m., encouraging them to attend and sign up for speaking lots at the newly launched website www.letnycvote.com.

During a conference call today, he said it was incredible that there was only one City Council hearing to discuss term limits--while many other major civic issues have had multiple hearings and meetings-- and believes the voters' voices must be heard instead of rushing this vote. And when asked about the NY Times report that Bloomberg's re-election would spend at least $20 million to "pound away" at him, Weiner said he thinks it's illegal for Bloomberg to run again in 2009 and wouldn't entertain any hypotheticals.

#anthony weiner
#city council speaker christine quinn
#mayor bloomberg
#term limits
Do you know the scoop? Comment below or Send us a Tip