City Councilman Was Arrested For 12 Hours Without Access To Attorney

Flanked by nearly a dozen other council members and his attorneys, City Councilmember Ydanis Rodriguez addressed a crowd atop the steps of City Hall this afternoon to share the details of his "improper arrest" during Occupy Wall Street's eviction from Zuccotti Park. "I have no problem participating in civil disobedience," said the councilman, "But this didn't have to happen to me and the nine reporters who were arrested. This was not an act of civil disobedience. My wife didn't want me to go and told me not to get arrested—we had a meeting at our daughter's school in the morning. I was not there trying to get arrested. I came to represent my community and to observe. It was my right and my obligation as a city official."

City Council Speaker Christine Quinn praised Rodriguez for his efforts to help the working poor in Manhattan's 10th district and drew comparisons to Council Member Jumaane Williams' arrest in September which eventually resulted in the discipline of three officers. "It's odd to be here a second time," said Quinn. "Why was he pushed to the ground? Why was he held in a van for two hours by himself before being processed? These are the kinds of questions that we want answered." Rodriguez and his colleagues claim that he was detained without access to an attorney for over 12 hours. Said Council Member Letitia James, "The Constitution was suspended here. He was denied his right to counsel and denied his right to an independent observation of his injuries." 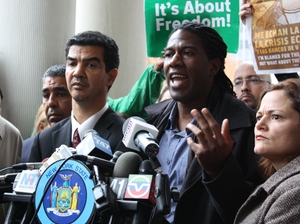 Jumaane Williams, who knows a thing or two about rule-crazy cops. (James Thilman/Gothamist)

Rodriguez sustained minor injuries to his left temple and right hand when he was pushed to the ground by the arresting officers for disorderly conduct. His attorney, Leo Glickman, called it a "bad arrest" and claims the officers involved are already facing federal lawsuits with respect to another matter, and one is currently under investigation for use of excessive force. Both his attorneys and Rodriguez refused to identify the officers, including a high-ranking officer whom the councilman claims was no more than 50 feet away during the ordeal. (A DCPI representative also tells us that they would not release the names of the arresting officers.)

"You can't arrest an idea and you can't evict a movement!" said Council Member Jumaane Williams, to applause. "And for the Spanish media here, I don't speak Spanish, but I say 'no bueno.'" Williams had arranged to meet Rodriguez at Zuccotti Park and arrived just in time to witness his colleague's arrest. "I immediately put the word out that Ydanis was bleeding," he said. "And I wasn't the only one in there who was bleeding," added Rodriguez.

Among those detained at 1 Police Plaza with the councilman was demonstrator Randy Credico, who has been arrested four times since his involvement with Occupy Wall Street. "Rodriguez remained calm, cool as a trout," he said. "He didn't want extra attention, but a guy who did need attention was a protester who they threw in with a lump on his head the size of a grapefruit. We made a lot of noise and yelled 'you're going to commit a homicide if you don't get this guy some medical help." An EMT who had also been arrested convinced police to remove the individual. The National Lawyers Guild declined to comment on his condition, but Credico said the protester remains in the hospital due to a concussion sustained during his arrest.

Anticipating the turnout for a planned march tomorrow morning to celebrate the two-month anniversary of Occupy Wall Street, Rodriguez said, "You want to know about civil disobedience? Wait til tomorrow."