On Thursday, the city council is expected to pass two pieces of legislation aimed at improving the treatment of inmates and solitary confinement at Rikers Island. In advance of the vote, a coalition of activists held a press conference yesterday on the steps of City Hall to speak on the inhumane conditions at Rikers, with elected officials detailing what is being done to protect those incarcerated at the Bronx jail complex.

The first piece of legislation will require quarterly reports outlining how many people are subject to solitary confinement, the reason they are placed in solitary, the length of their confinement, their age, and their mental health. The second will be a resolution calling for the end of “time owed,” a practice that requires individuals who have been released from city jails to complete their time owed in solitary confinement if they are to return.

Leading the legislation to reform Rikers is Queens Council Member Daniel Dromm, who said in a press release yesterday morning that a “a key component to combating brutality at Riker’s Island is limiting the use of solitary confinement.” He hopes that his legislation will create added awareness of what goes on within Rikers, claiming, “transparency will give us the data we need to address this issue.” 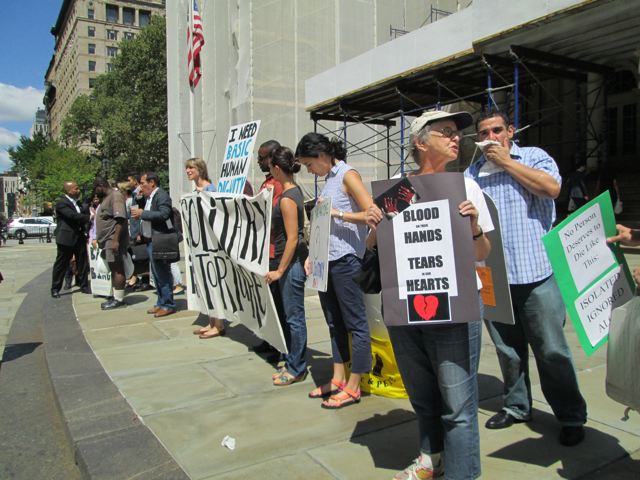 As we reported earlier this month, inmates in solitary spend "23 to 24 hours a day inside a small cell with only a mattress and a toilet-sink combination. They are allowed one hour of recreation outside the cell in a small cage. Recreation is offered at 4 a.m., and to take advantage of it the person must be awake and standing by their cell door." Yesterday Johanna Miller, Advocacy Director at New York Civil Liberties Union, declared, "Solitary confinement is the most severe form of punishment, other than the death penalty, that is currently practiced in the United States."

Council Member Andy King reminded those in attendance at City Hall on Monday that for many, Rikers Island is a holding facility until trial. The reality is that many inmates at Rikers Island haven’t been given their day in court, haven’t been proven guilty, and are there because they didn’t have the means of paying their own bail.

But many say that reforming solitary confinement is a mere scratch on the surface of the reform necessary to modernize Rikers Island, with an ingrained culture of brutality inflicted by correctional officers, as well as the inappropriate treatment of people suffering from mental disabilities.

According to a NY Times article published in July, in “an 11-month period last year, 129 inmates suffered ‘serious injuries’ — ones beyond the capacity of doctors at the jail’s clinics to treat — in altercations with correction department staff members.” Of those injured, 77% received mental illness diagnosis. The article asserts that Rikers Island currently houses roughly 4,000 mentally ill inmates, or 40 percent of the prison population.

Yesterday's rally came as the family of a teenager who died during a stint in solitary confinement on Rikers Island filed a lawsuit against Corizon, the company that is supposed to provide medical care at the city's jails. Last September, Rikers inmate Bradley Ballard died after spending a week in solitary. And earlier this summer, a secret report prepared by the Health Department and obtained by the NY Times revealed that correction officers at Rikers beat mentally-ill inmates with impunity.

Public Advocate Letita James was adamant that "Rikers Island should not be a housing program for individuals who are mentally challenged.”

#City hall
#Jails Action Coalition
#Rikers Island
#solitary confinement
#original
Do you know the scoop? Comment below or Send us a Tip