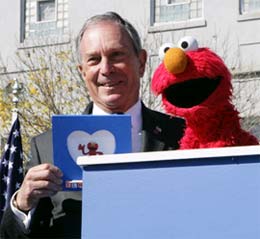 A new Quinnipiac University Poll shows that voters want to decide on the term limits issue. And then there are the billionaires who want to keep term limits in tact in some way or another. Ronald Lauder who supports a third term for Mayor Bloomberg, tells the NY Times "he would vigorously oppose allowing council members now serving their first term to remain in office for three terms"--which could conceivably influence how members vote.

Then there's Tom Golisano, with his $1.6 billion net worth, who formally announced he'd "bankroll" the effort to stop the extension of term limits with newspaper, radio and TV ads, "To maintain the spirit of democracy, there should be at least another public referendum." Newsday reports that Bloomberg said of Golisano's cash, "Well, if he spends a lot of money in New York City, I think that's wonderful, the advertisement business isn't all that good at the moment. If he wants to spend his money, that's fine." To which Golisano said, "I have no idea if they are taking me seriously or not, but I think it's a really serious issue." Yes-- billionaire battle! As City Council member Letitia James said, "The best way to deal with a billionaire is to get another billionaire!"

#City Council
#mayor bloomberg
#Ronald Lauder
#term limits
#tom golisano
Do you know the scoop? Comment below or Send us a Tip