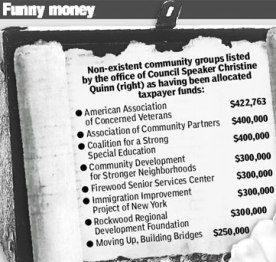 According to the NY Post, the City Council Speaker's office has, since 1988, had the tradition of granting money to "phantom" (as in fake) groups. A source explained it gave the speaker "a stash of cash with which to thank or pay off politically important allies or cooperative council members."

During 2007 and 2008, $4.7 million has been set aside for thirty different phantom groups. City Council Speaker Quinn told the Post while she knew some money was being held, she only found out the groups were fake a few months ago. She also said she told her staff to stop funneling money to the fake groups, but they didn't, "I was kind of sick over the fact that there were things listed in the budget that were not accurate and that my instructions to the staff were disregarded."

Quinn says she turned over information to city and state authorities. But the Post's sources believe "authorities have been investigating some aspect of the council's finances since last year."

Quinn became Speaker in 2006, succeeding after Gifford Miller left office due to term limits. Before Miller, Peter Vallone Sr. was the speaker. Update: Vallone Sr. denies this practice occurred during his term to the NY Sun, "There would never be any practice in my administration which would involve allocating money to a false organization.”