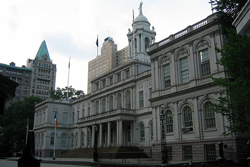 The City Council's Committee on Government Operations met this week to talk about possible changes to how much money council members make. Questions were raised about how raises were determined, leadership bonuses, and whether outside work should remain permitted. After a 25% increase in base pay in 2006, council members earn $112,500 annually. They can earn an additional $10,000 a year on average if a member holds a leadership position. In addition, members can hold a second job or seek outside income.

Richard Dadey, who is the executive director of Citizens Union, thinks that the $10,000 leadership stipends (aka lulus) should be eliminated, seeking outside work compromises council members' independence, and that the council should not be able to vote itself pay raises. Members resistant to change point out that they are on call almost 24 hours a day, 365 days a year to aid constituents. And of the 51 members of the council, only a handful actually hold jobs in addition to their elected office.

Councilman Joseph Addabbo of Queens said that if outside employment were truly compromising members' ability to do their jobs, voters would recognize that and vote them out in the nearest election. And while Dadey said that as public servants, council members should be prepared to make certain sacrifices, the best line of the debate came from Bronx councilman Larry Seabrook, who said that he "took an oath to serve, not an oath of poverty."