The City Council has just voted unanimously to approve a $89.16 billion budget that Mayor Bill de Blasio and Council Speaker Corey Johnson announced earlier this week. The budget, which increased 4.6 percent over last year, funds discount MetroCards for low-income New Yorkers, a major win for Council Speaker Corey Johnson. But while the city’s strong economy and growing tax revenue means that the budget outlook is stable, there are storm clouds on the horizon.

Pressures from the state and federal level, deteriorating infrastructure, and healthcare costs threaten the city’s long-term fiscal condition. Future budget negotiations between the Mayor and City Council promise to be more difficult than this year. Fiscal pressures will squeeze the budget and make it more difficult for the city government to deliver on promises to educate kids, keep the streets safe, and help those in need.

New York City’s economy has recovered exceptionally well from the Great Recession, making it possible to increase spending and fund new initiatives. New York has added over 800,000 net new jobs since the depths of the recession in 2009. This year alone the city collected $1 billion in unanticipated additional tax revenue

The city’s budget has grown quickly under de Blasio, flush with cash from a growing economy and rising property values. This year’s budget is 22% larger than the $72.9 billion budget de Blasio inherited from his predecessor. 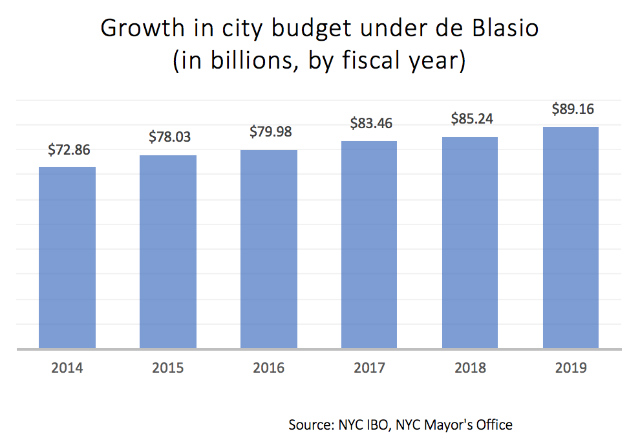 The biggest threat to the city’s budget is an economic downturn. To prepare for the next recession, elected officials have asked the Mayor to enforce savings targets for city agencies and add more to city reserves. The budget includes $225 million in additional reserve funds, short of the $500 million that Council Speaker Johnson requested.

In an economic downturn, de Blasio and Johnson will have a tougher time holding the ballooning budget in balance while keeping their commitments to fund progressive programs. While economists cannot tell us when the next recession will hit, there are a number of fiscal pressures that we know are on the way.

Pressure from state and federal government
Leaders in the state and federal government have pushed changes that will reduce funding to the city government. Governor Andrew Cuomo has asked the city to bear more of the burden for higher education, healthcare, and public transit. This Cuomo pressured the city into paying for half the cost of the $836 million Subway Action Plan. In previous legislative sessions, Governor Cuomo asked the city to pay more for CUNY and Medicaid.

Cost shifting from the state to the city pales in comparison to the pain that the Trump administration and Republicans are trying to inflict on New York and its low-income residents. Ben Carson’s HUD has proposed massive cuts to public housing and increased rents for low-income tenants receiving subsidies. The Trump administration has tried to withhold funding from cities that welcome immigrants. The Republicans in congress have proposed cuts to food assistance programs like SNAP.

Deteriorating city infrastructure
The city’s infrastructure, much of it built before the Great Depression, is falling apart and needs tens of billions of dollars of work. The public is well aware of deteriorating buildings at NYCHA and a subway in desperate need of fixing. This week the city signed a consent decree to pay for $2 billion in repairs to NYCHA over the next 10 years. This is just small down payment on the approximately $25 billion in funding needed to fix NYCHA’s aging housing stock.

New York City Transit Chief Andy Byford’s Fast Forward plan to fix the subway could cost between $19 billion and $43 billion. Regardless of how the state eventually pays for this plan, residents of the city should expect to get hit with most of the cost.

Other critical infrastructure is falling apart. In 2014 the Center for an Urban Future found the city’s ancient sewer, water, and gas lines endangered city residents and the city has tens of billions of the dollars in unfunded needs to bring this infrastructure up to a state of good repair. 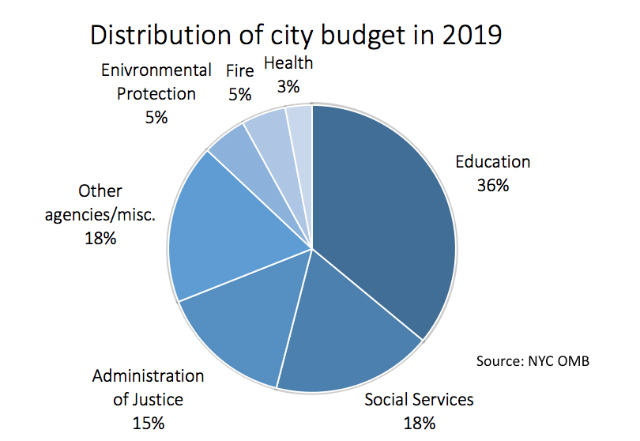 Retiree healthcare costs reach over $90 billion
While the city has been responsible about funding its pension fund, it faces a large unfunded liability from retiree healthcare costs. Retired city employees receive individual and family health insurance at no additional cost to themselves. The total liability for these post-employment benefits is approximately $93 billion, with only $4.35 billion set aside in the Retiree Health Benefits Trust to pay for future costs. The city has an obligation to pay for these benefits and must find a way to the make the cost sustainable.

Expired labor contracts to negotiate
When de Blasio came into office he faced an unprecedented situation: all of the city’s more than 300,000 unionized employees were working without a contract. The Mayor successfully brokered deals with the vast majority of city unions, but now many of those contracts are up for negotiation once again. The city needs to help its employees keep up with New York’s astronomical cost of living, at the same time the Mayor will want to put a lid on the overall costs of the city workforce.

Devin Gould previously worked as a Budget Analyst at NYC EDC and recently received a masters degree in public policy from Princeton University.