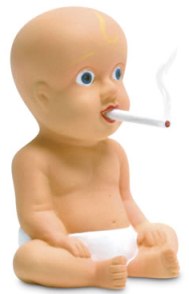 First bars, now cars - will banning smoking in people's home be next? City Council member James Gennaro will be proposing legislation that will prohibit smoking in cars carrying minors. The Sun reminds us "if enacted, smoking in cars with riders under the age of 18 would join a growing list of activities barred by the city, including making too much noise at night, serving trans fats in restaurants, and allowing students to carry cell phones in school."

Gennaro says, "We want to continue to fight to denormalize smoking," pointing out cigarettes, out of the 4,000 chemicals they contain, have 150 that are "known to be poisonous." Fines would start between $200-400 for a first violation, and then rise to $500-1000 for the second and $1000-2000 for the third. Mayor Bloomberg hasn't commented about the legislation yet, but we bet he signs it.

As for civil liberties, Gennaro told the Sun, "Boo-hoo. You can't subject kids to 43 carcinogens and 250 poisonous chemicals and claim privacy. Get over it. Their right to privacy doesn't extend so far as to poisoning kids."