"We need to know what we will be paying for," said Council Speaker Melissa Mark-Viverito. "We need a complete breakdown of spending."

While MTA Managing Director Ronnie Hakim echoed Lhota's call for the city to allocate more money, his absence at the contentious hearing did not go unnoticed.

"I'm very disappointed that Chairman Lhota is not here himself despite multiple personal requests, especially considering the amount of money he asked for," the Speaker said, looking sternly at Hakim and two top MTA budget officials.

"You're asking us for additional oversight," he said. "We don't have additional control."

For several hours, council members from across the five boroughs ticked off their constituents' grievances about maintenance and accessibility. They decried the MTA's delayed signal system overhaul, the glut of stations lacking handicap accessibility (355 of the total 472 lack elevators, according to the MTA), and the lack of reliable metrics for measuring delays.

There was also considerable back-and-forth about an estimated $456 million, which City Hall maintains has been siphoned from the MTA by the state since 2011. A recent City Hall press release cites $391.5 million diverted to the state's general fund from the Metropolitan Mass Transportation Operating Assistance Account between 2011 and 2015, plus $65 million in promised state MTA reimbursements diverted from the MTA in 2017.

MTA budget director Doug Johnson insisted that "a lot of those monies were instead given to the MTA for capital purposes," and that the net loss to the MTA since 2011 is $165 million. (The MTA did not immediately respond to a request for a more detailed explanation of these diversions.) 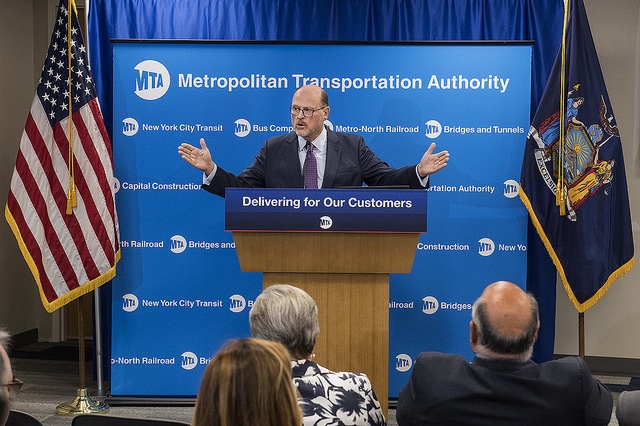 Some members of the city council said the sparring over short-term funding is a distraction, considering the MTA's staggering overall debt of $38 billion. "I don't want to get caught in a fight about a short term plan," said Brooklyn Councilman Brad Lander.

In terms of finding longterm funding, Mayor Bill de Blasio on Monday endorsed a tax on the top less-than-one percent of NYC residents, while Governor Cuomo began hinting at his interest in congestion pricing—a proposal to tax drivers into Manhattan that has floundered in Albany since the Bloomberg administration. One recent iteration of the so-called Move New York plan failed to pass in Albany last spring, but gained a Republican endorsement in Staten Island Senator Andrew Lanza. Mayor de Blasio's millionaire tax, meanwhile, has Democratic support in Senator Mike Gianaris but has already met with opposition from Republican Senate leadership. ("Raising taxes is not the answer," majority leader John Flanagan said in a statement to the Times.)

Hakim declined multiple requests to endorse any one plan on Tuesday. "Anyone in transportation would support reliable funding sources," she said.

"I do think it's ironic that on Friday the mayor dismissed congestion pricing because of problems he saw with the Republican-controlled Senate, and then two days later he proposed a tax even less appealing to the Republican Senate," Matthiessen said.

This sparring between the city and the state over funding obscures the even more pressing issue of the MTA's documented mismanagement of funds, according to the NYC Independent Budget Office.

"The issue of when these new investments will actually be made, and when they will begin to benefit subway-riders, is perhaps even less clear than the source of funding," IBO Deputy Director George Sweeting testified Tuesday. Only 37 percent of the MTA's last $22 billion Capital Plan had been spent by the end of 2014, according to an IBO analysis.

Sweeting also referenced the state's $8.3 billion commitment to the current 2015-19 Capital Plan which, along with the city's $2.5 billion commitment, won't be spent until all other funding sources are exhausted. Sluggish signal repair is one consequence of this.

"The source for much of that money remains unspecified... with much of it unlikely to be delivered until after the plan period is over—setting up another round of delays in the funding of individual projects," Sweeting predicted.

All the reported crimes occurred while the Bryant Park Winter Village, a popular and often packed tourist attraction, was in full swing.

In the past, Gov. Kathy Hochul has refrained from explicitly denying her support for these types of programs, which are also known informally as safe injection sites.

In the past, Gov. Kathy Hochul has refrained from explicitly denying her support for these types of programs, which are also known informally as safe injection sites.