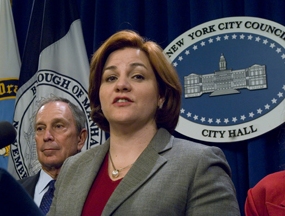 What was supposed to be a rainy day now seems more like a category 3 hurricane fund, as the story of the City Council's practice of distributing money to fake community groups unravels. It turns out that since 2001, $17.4 million has been allocated to the fake groups, with $4.7 million set aside in 2007 and 2008.

At a press conference, City Council Speaker Christine Quinn explained she learned of the practice last spring and told the finance staff to stop. However, the practice continued, so she turned over documents to the authorities. Quinn said, "I was obviously deeply troubled when I found out about this information." The two top finance people left the office.

According to the Times, the fund was originally supposed to be a way for the City Council to have money in reserve "to fill future gaps at agencies," giving it "control over some spending" and would help avoid "any messy battles with the mayor’s office when funds ran short." Quinn added, "We can confirm that the listing under fictitious organizations has gone back to 2001," which means it happened under former Speakers Gifford Miller and Peter Vallone Sr. Why did it start? Well, apparently then Mayor Giuliani "refused to negotiate" on the budget, so, a former Vallone aide explained to the Daily News, "we created four or five bogus groups."

One of the beneficiaries of the phantom group money was the Friends of the Highline, which Quinn says was accidentally left off the real budget. And Mayor Bloomberg said he didn't know about the phantom groups receiving funds, "If I found there were fake organizations in there, do you really think that I would sign the budget? Thank you very much. I would hope you'd expect a little more from me, for goodness sake." Hmm, do groups like "Stand New York," "Movie Up, Building Bridges," and "Greater New York Cleaning Program" sound fake? (Here's a list.)

#christine quinn
#City Council
#Gifford Miller
#Peter Vallone Sr.
#phantom group
Do you know the scoop? Comment below or Send us a Tip