The City Council is one step closer to passing a trio of bills aimed at holding police officers accountable for excessive uses of force against civilians. The legislation calls on the NYPD to issue annual reports quantifying the use of force, and examine any correlation between the use of force and quality-of-life policing.

All three bills passed the Council's Public Safety Committee by a vote of 6-1 on Tuesday, and are now headed to the full council for a vote.

"It is my hope that we can move towards better relations with the police," said Brooklyn Councilmember Jumaane Williams, before voting "aye." "This [legislation] will help find ways to deescalate, if at all possible."

The bills do not require the NYPD to report officers by name, nor do they address the demographics of civilians victimized by police—an omission advocates take particular issue with, as a missed opportunity to "reveal law enforcement’s disparate impact on marginalized groups," according to New York Civil Liberties Union Advocacy Director Johanna Miller.

Also this week, the NY Times reports that the City Council made a closed-door decision not to vote on the Right To Know Act, reform legislation that advocates argue would have more of an impact on street-level policing.

Communities United for Police Reform, the NYCLU and others had thrown their weight behind the the Right To Know Act, which reportedly gained majority City Council support over the course of several years.

The act would have required police officers to identify themselves by name, rank and command after civilian encounters that don't result in an arrest or summons. It would also have required officers to justify, specifically, their reason for an approach—from a stop-and-frisk, to a vehicle search. While adjustments to NYPD protocol are still expected, they'll be handled internally.

"Especially at this moment in time, the [use-of-force] bills are pretty toothless," said Ileana Mendez-Penate, director of programs for the Audre Lorde Project—a nonprofit representing the rights of LGBTQ New Yorkers of color. "Our general concern about bills that emphasize data collection, is that they don't result in changes in how officers are acting on the streets."

"They often have the impact of increasing funding for training, and that actually pours more money into the police," she added. "What we're looking for is less police on the street." 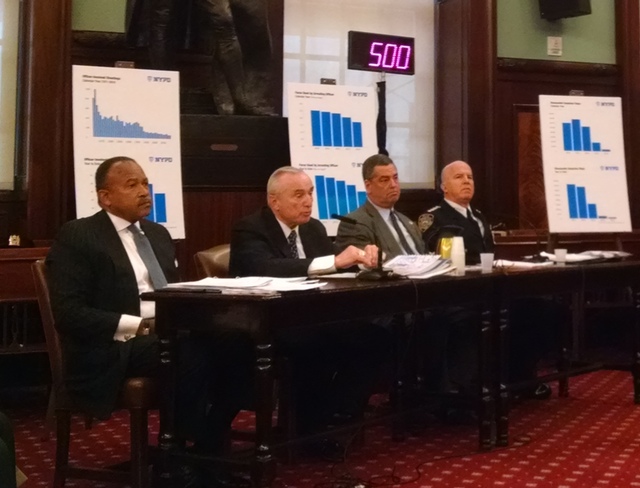 One of the bills, sponsored by Queens Councilmember Rory Lancman, would require the NYPD to publish quarterly and annual reports on use-of-force incidents, including the type of force used in each case, the offending officer's precinct, and whether the officer was on duty when the incident occurred.

In the case of excessive force, the NYPD would clarify whether guns were involved, and lay out any charges brought against the officer.

"This is valuable information, but is of limited utility if the Police Commissioner fails or refuses to act on it," the NYCLU testified last month, adding, "We can no longer stand for the protection of abusive police officers by the Commissioner or any other actor."

A second bill, co-sponsored by Councilmember Williams, would require the NYPD to make quarterly reports on any use of force cases involving an alleged quality-of-life offense. A spokesman for Williams said Tuesday that the bill was inspired by Eric Garner, who was allegedly selling loose cigarettes when NYPD Officer Daniel Pantaleo approached him, and then strangled him to death with a banned choke-hold. Tomorrow marks the two-year anniversary of Pantaleo's non-indictment. The goal of the bill is to lay bare any correlation between quality-of-life policing and excessive force.

The third bill, co-sponsored by Staten Island Councilmember Deborah Rose, would require the NYPD to release an annual report on the number of officers in each precinct who have multiple CCRB complaints to their name, have been suspended following an internal investigation, have been arrested, or have used excessive force.

Advocates have argued that the Right To Know Act, unlike these use-of-force quantification measures, would cut back on unlawful street stops. But unlike the use-of-force bills, the now-imperiled act lacked NYPD endorsement—testifying before the City Council last summer, NYPD Commissioner Bill Bratton called the Right To Know Act an "unprecedented intrusion into the operational management of the police department."

Mayoral Spokeswoman Monica Klein confirmed the Mayor's support of the use-of-force bills on Tuesday. "From retraining our officers and revising NYPD's use of force policy to launching body cameras and neighborhood policing, we’re taking clear steps to strengthen the relationship between police and communities and increase transparency," she stated.

[UPDATE 7/13]: A spokesperson for the CCRB issued the following statement:

In light of the recent tragedies involving officers and civilians in Louisiana, Minnesota and Dallas, the fact that the New York City Council is looking into matters involving police use of force is prudent and apropos. Any time there is progress around data transparency and analysis with respect to policing, it can move towards the goals of building community trust, strengthening accountability, and further improving law enforcement agencies overall.

#City Council
#excessive force
#nypd
#use of force
Do you know the scoop? Comment below or Send us a Tip