The City College of New York, one of the City University of New York’s senior colleges, is facing a $14.6 million budget gap. “There’s no other way to say this: Students are doomed,” argues Tammie David, a City College junior who serves as the Vice-President of Public Affairs for the Undergraduate Student Government.

“There are cuts to every single department. There is not a single way students won’t be affected.”

From larger class sizes to a lack of resources to a shrinking course selection, students and professors alike worry how these cuts will impact the college’s ability to meets its community’s needs.

The sources of CCNY’s budget crisis are diverse: According to a recent report on the Fiscal Year 2016 budget, state funding will decrease by $4.2 million, funding from CUNY will be reduced by $1.7 million, and CCNY’s costs will increase by $5.4 million. The final $3.3 million stems from decreasing enrollment, which left the school unable to reach its tuition target of $88 million.

Every department will be affected by the cuts, with those with decreasing enrollment suffering the most.

“Everything from registering for classes to lining up for financial aid," David says. "What if they don’t have enough people in the administrative building to service them? All the way down to what their majors are: Will it even be offered next year? Will they be able to graduate on time? Will they be able to get enough tuition assistance to provide them that education?”

In some departments, the consequences of the cuts are already evident. Daniel Carillo, an assistant professor in the music department, spoke of slashing the size of the adjunct faculty, reducing class offerings, and broken equipment that they cannot afford to repair. His department has also witnessed ballooning class sizes, with professors no longer able to interact with students on an individual basis.

According to David, City College President Lisa S. Coico held an emergency meeting with the student government last month to discuss the budget.

“They did a great job of explaining it to us,” she says. “What I will say, though, is that there is not much of a plan in place to fight back against this. I feel as though I’m disappointed with the administration not calling [Governor Andrew] Cuomo on his cutting of senior colleges.”

David’s words hint at the hierarchy of decision-making in the complicated CUNY bureaucracy. Yesterday’s protesters questioned their school’s priorities and how it uses the funding it receives, but their targets include not only administrators on their Harlem campus but also those in CUNY’s central office and state legislators in Albany.

On Tuesday, a group of about twenty students began to gather in front of City College’s Howard E. Wille Administration Building just after noon. The crowd grew as the rain and wind picked up. The protest’s MCs were yelling into a bullhorn and chanting, “If you hate the budget cuts and you’ve really had a enough/If you hate the budget cuts, clap your hands,” to the tune of “If You’re Happy and You Know It.”

A CCNY spokesperson sent this statement in response to questions on the budget cuts and student protests: "City College is one of the most diverse campuses in the country where freedom of expression is encouraged. We support the opportunities students have to demonstrate peacefully in an open and safe environment."

City College is not alone in facing these financial challenges. Public universities across the country are experiencing decreases in state funding. Many are compensating by increasing tuition, relying on students’ fees to keep the lights on and the floors swept. Over the past thirty-five years, public university tuition has almost quadrupled. But CUNY’s particular history makes these trends all the more glaring.

Founded as the Free Academy in 1847, it is now one of the largest public university systems in the country. The school’s first president, Dr. Horace Webster, described its goal thus: “The experiment is to be tried, whether the children of the people, the children of the whole people, can be educated; and whether an institution of the highest grade, can be successfully controlled by the popular will, not by the privileged few.”

The Free Academy became the City College of New York in 1929. More public colleges quickly joined it and the CUNY system was formally created in 1961. By then, the city’s collection of schools already had a rich history of student activism and political engagement. That engagement was put to the test in 1976, when New York City went bankrupt and reorganized its finances away from public institutions.

Despite protests, CUNY instituted tuition and gradually shifted funding responsibilities from the city to the state. The effect [PDF] was immediate: Enrollment dropped by 62,000 students and by 1980, there were 50 percent fewer black and Latino freshmen than there had been in 1976. CUNY also laid off 91 percent of its part-time faculty members and 24 percent of non-tenured full-time faculty, as well as halted capital construction and library and laboratory acquisitions. 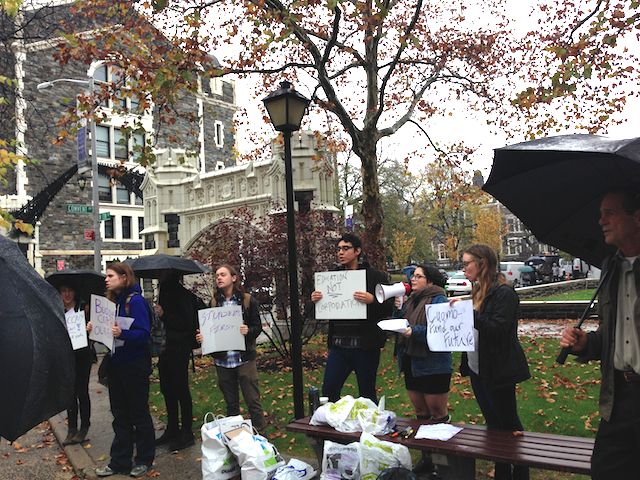 Since then, tuition has continued to rise and its demographics have become less representative of the city it serves: Tuition increased by 15 percent in 2009 and black students comprised only 10 percent of the freshman class at its five most competitive senior colleges in 2011, compared to 17 percent in 2001; 45 percent of CUNY’s budget now comes from tuition.

In 2011, Governor Cuomo signed the NYSUNY 2020 legislation. The law instituted a “rational tuition” plan of $300 tuition increases every year for five years for CUNY, as well as for the State University of New York system. One of its conditions was that there would not be any budget cuts during that time. However, the plan did not take rising mandatory costs, such as rent, into account. Instead, tuition revenue was put towards those expenses.

Those five years of tuition hikes are now expiring, but students fear that budget cuts will become the new norm and that the “rational tuition” plan will be extended. The two occurring simultaneously provides a daunting struggle for student organizers.

“All of the money that they wanted to be cutting all those years is now coming at once. And there’s not even any guarantee that the tuition increases won’t continue, as well,” says Riley Tinney, a City College senior and a member of Students for Educational Rights, a CCNY social justice group that organized the protest.

One idea for a small reprieve remains on the horizon. The New York State Senate and Assembly both passed a Maintenance of Effort bill this summer, which would require the state to fund CUNY’s mandatory cost increases. Governor Cuomo has yet to sign it.

“They’re telling us to just pay for your education yourself, like it’s not a public good or something that they should see as part of the responsibility of the state,” argues Riley Tinney.

“And I think that’s having a really negative impact on who can come and how it works to education the ‘whole people.’”

Rebecca Nathanson is a freelance journalist based in New York. She has written for Al Jazeera America, n+1, The Nation, NewYorker.com, RollingStone.com, Salon, and more.

#CCNY
#city college
#governor cuomo
#the free academy
#longform
#original
Do you know the scoop? Comment below or Send us a Tip