Deputy Mayor Cas Holloway filed a motion on behalf of the city today opposing a court order requiring the NYPD to allow Occupy Wall Street demonstrators back into Zuccotti Park. In filing the motion, Holloway asserted that "people who have a known history of violent interaction with the police” have been gathering in the park, and “makeshift items” that he said could be used as weapons, "such as cardboard tubes with metal pipes inside, had been observed among the occupiers' possessions." He also noted that after the October 1st Brooklyn Bridge march, "knives, mace and hypodermic needles were observed discarded on the roadway."

"It was our understanding that the protesters may have had a significant number of items that could potentially be used as weapons," Halloway writes in the motion, adding that there had been little to no crime in Zuccotti Park before the occupation began, but since there had been "73 misdemeanor and felony complaints" and about 50 arrests. Although the initial order to vacate (see below) promised demonstrators they would be allowed in—though without tents and sleeping bags—Bloomberg is now refusing to comply with the court order, and the park remains closed. A growing throng of demonstrators have gathered around it.

Justice Michael Stallman is expected to issue his decision around 3 p.m. In the meantime, here is Brookfield's letter to Bloomberg, which was sent to the Mayor yesterday. The letter urges the city to intervene in the interest of "public safety" and cites media reports of "violence, outbursts of bigotry, and escalating sanitary conditions."

Brookfield Letter to the Mayor Re Zuccotti Park

I am greatly troubled by reports of unnecessary force against protestors and members of the media, including the use of “chokeholds” and pepper spray. I am also troubled by reports of media being forcibly kept away at a distance from these events. American foreign correspondents routinely put themselves in harm’s way to do their jobs, in some of the most brutal dictatorships in the world. And their NYC colleagues deserve the freedom to make the same choice. Zuccotti Park is not Tiananmen Square. I call for a full explanation of police behavior in this evacuation.

We have also been urging the City to have a zero tolerance policy on noise and sanitation violations, and to make the results of its enforcement public. But we must balance the core First Amendment rights of protesters and the other legitimate issues that have been raised.

The City’s actions to shut down OWS last night raise a number of serious civil liberties questions that must be answered. Moving forward, how will the City respect the protesters’ rights to speech and assembly? Why was press access limited, and why were some reporters’ credentials confiscated? How will reported incidents of excessive force used by the police be addressed?

“On the issue of Brookfield’s rules, we are very concerned that they were promulgated after the protesters arrived; the specific legal questions on this topic are being addressed where it is appropriate - in the courts. Whatever the courts rule, the City’s actions here must not be a backdoor means of ending the free exercise of protesters’ rights.

And Council Member Jumaane D. Williams and the Black, Latino and Asian Caucus are holding a press conference in Foley Square now. In addition to condemning last night's raid, Williams will call attention to the arrest of Council Member Ydanis Rodriguez (D-Manhattan), "who is still in custody due to overaggressive policing tactics which also led to the banning of the press from the park and the improper seizure of personal property, amongst other violations." 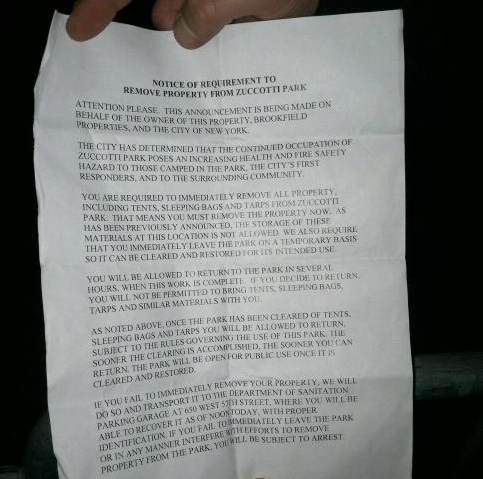 #brookfield properties
#cas halloway
#occupy wall street
#Zuccotti Park
Do you know the scoop? Comment below or Send us a Tip