Headspace comes at a premium in this wildly overpriced city, and by headspace I don't exclusively mean the nebulous mental arena in which your inner life unfolds. I mean actual space for your head—an apartment in which the ceiling doesn't bear claustrophobically down on your shoulders and the walls don't squeeze you in an uncomfortable architectural hug. In a real estate market where some grifters feel justified in asking nearly $1,400 per month for a sham of a studio where one (you hope) lucky chump gets to sleep under their refrigerator, inside their kitchen which is also the bathroom, it fails to surprise that an enterprising scammer might carve up their modest apartment into...many more apartments, all rentable for the still-unreasonable price of $600.

The Department of Buildings recently busted two landlords at 165 Henry Street for having subdivided their Lower East Side apartments into nine micro-apartments, apparently by bisecting each of their original units with a new (and illegal) floor. Those halves appear to have then been partitioned to create 18 tiny, unauthorized closet homes in a building that's supposed to have 27 units, total. In these apartments for ants, occupants likely had to scoot around on their knees, or constantly hunch to clear ceilings that, in some cases, would have been tall enough to accommodate a medium-sized child.

According to the Department of Buildings, inspectors visited the first of these creatively re-imagined pod cities on August 14th: At #601, they found a 634-square-foot apartment allegedly carved into nine windowless living spaces by one Xue Pin Ni. Ni effectively created a created a 4½ Floor within his own unit, leaving the ceiling as low as 4.5 to 6 feet from the floor, the DOB says. Ni also racked up 11 violations for allegedly engineering a towering fire hazard: None of the improvised mini-studios ("Single Room Occupancy" units) had sprinkler systems or reasonable exit routes. The apartments-within-an-apartment posed an "immediate life safety risk to the tenants," according to the DOB, which issued a vacate order to the current residents. 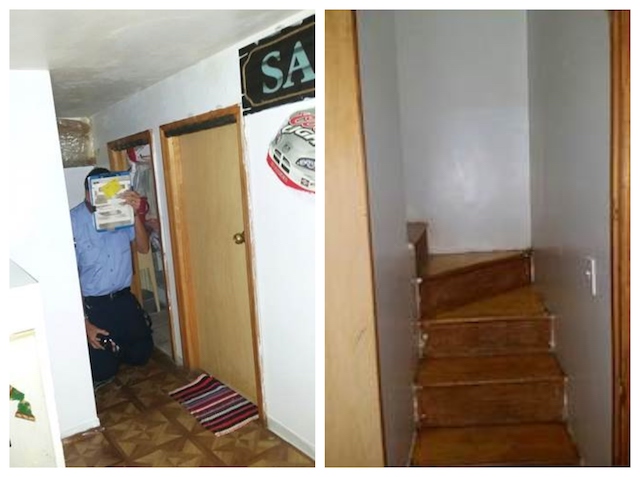 Cozy! And very unsafe: A view inside #601 165 Henry, and a truncated staircase inside #701. (Department of Buildings)

In the apartment above Ni's—which, the NY Post reports, Ni has previously listed as his address, although its current owner the DOB identified as Jin Ya Lin—the DOB found an eerily similar real estate solution on August 16th. #701 had also been hacked into two half-floors, also containing nine SRO units, which "lacked light, ventilation, fire protection systems, and proper egress." According to the Post, the landlord had wedged AC units into the top and bottom of the apartment's floor-to-ceiling windows, such that a handful of cubby rooms at least had some kind of climate control and, maybe, a sliver of natural light. ("Five air conditioners in three windows," by the Post's count.)

The DOB issued a vacate order for #701 as well, and both landlords have been charged upwards of $100,000 in fines: Ni could pay up to $144,750 in civil penalties, plus $1,000 per illegal unit every day for as many as 45 days; Lin could pay a maximum of $139,750 in civil penalties, plus that same $405,000 in daily charges. The DOB did not confirm the rent for any of these units, but one departing tenant told the Post they paid $600 per month. Which still seems pretty high, considering the arrangement: Makeshift shelf homes stacked one on top of the other, without regard for electrical regulations or fire safety protocol, and with an extremely suspect bathroom situation to boot.

"I'm concerned for the safety of the tenants, mostly an immigrant population," Ben Kallos, a NYC Council Member, told PIX11 News. "Part of me thinks this is like the movie Being John Malkovich, back in the 1990s. Then there was this idea of creating a floor in between. But that was fiction and this is a horror story."

"Every New Yorker deserves a safe and legal place to live," he said. "Tenants living in truncated windowless dwelling units like this poses an extreme hazard to their safety, as well as the safety of their neighbors, and first responders. Dangerous living conditions like this cannot be tolerated in our city, and we are holding these landlords accountable for their egregious failure to keep the building safe and livable for tenants."

And yeah, you have to wonder if the person who devised this scheme ripped it straight from the movies, because the set-up—replete with tiny doors and strange small staircases that don't not look like they might lead you up inside some acclaimed actor's skull—does look a lot like the office set-up depicted ina certain 1999 cult classic. You know, the business located on floor 7-and-a-Half of a nondescript office tower, accessible by elevator to those who know when to deploy the crowbar, where our antihero John Cusack discovers a secret chute straight into John Malkovich's brain.

#apartments
#Being John Malkovich
#landlords
#LES
#Lower East Side
Do you know the scoop? Comment below or Send us a Tip
A new Gothamist is coming! We’ve moved comments over to our beta site. Click here to join the conversation and get a preview of our new website.