At least six MTA bus drivers have been charged under a year-old law that punishes drivers for fatally striking or wounding pedestrians who have the right of way. The union that represents the vast majority of MTA bus drivers, TWU Local 100, wants to exempt their members from the law. To prove that placing safety before punctuality just isn't realistic under current New York City traffic conditions, bus drivers exercised their power this morning by driving with an excess of caution in Inwood and the Bronx.

According to a TWU release, drivers at White Plains Road at Lafayette Ave and at 181st Street and Wadsworth Avenue were told to "come to a complete stop - and not move - until all pedestrians were on the sidewalk. Not close to the curb but completely off the street."

This morning at 181/Wadsworth: Buses wait as pedestrians cross. If it takes a bit longer, so be it. #1u pic.twitter.com/clhAtRpp7t

The union claims that this caused traffic to back up "from 181st Street and Wadsworth over the East River bridge into the Bronx."

The union also distributed this flyer at the intersections. 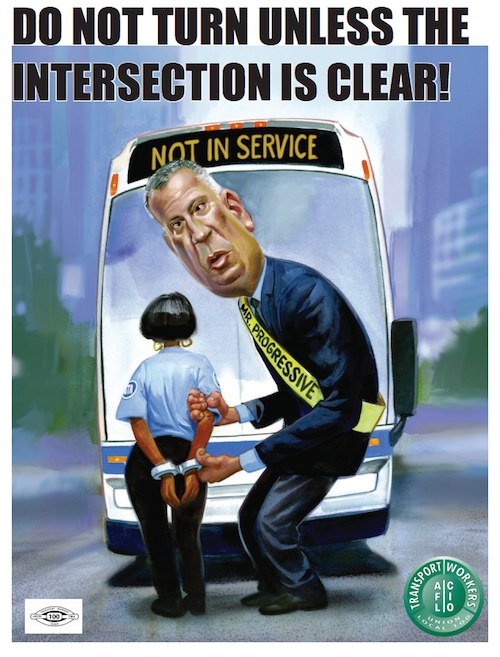 “TWU Local 100 today educated and instructed bus operators how to drive in full compliance with the de Blasio administration’s Right of Way law," the union's president, John Samuelsen, said in the statement. "They were instructed to come to a complete halt before making a left turn and not to proceed until all pedestrians were on the sidewalk.”

We asked TWU spokesman Pete Donohue if it wasn't common sense to drive cautiously in the first place.

"Common sense would dictate that you should not give a bus a green light to make a left turn onto a street and, at the same time, give pedestrians the 'walk' signal to cross that same street," Donohue replied. "That’s what the city’s traffic signal system does and it’s a recipe for disaster."

(Wiley Norvell, a spokesman for the Mayor's Office, pointed out that "Yielding to pedestrians and waiting for walkers to clear the crosswalk before turning is sound and safe advice for any driver.”)

Donohue argues that "the safest thing to do would [be] to give the bus operators a 'left-turn-only' signal - and give pedestrian a 'don’t walk' signal. That way the bus can make a dangerous turn alone without pedestrians getting a ‘walk'  to potentially cross into their path."

In lieu of installing these signals (and additional mirrors on the buses), the TWU is fighting for the passage of a law that would exempt bus drivers from prosecution under the Right of Way law unless there is tangible proof of negligence—such as a positive Breathalyzer reading or evidence that the driver was texting.

Drivers who simply don't see a pedestrian before striking them would be exempt from prosecution.

Yesterday, Mayor de Blasio was asked about the bill. “We’re not going to weaken laws that protect people’s lives," he replied. "I’m very proud of the fact that we have driven down traffic fatalities; we’ve driven down pedestrian deaths. Last year, in New York City—the fewest pedestrian deaths since 1910 - over a century.”

#MTA
#pedestrian fatalities
#pedestrian safety
#TWU Local 100
#vision zero
#original
Do you know the scoop? Comment below or Send us a Tip