City And State Bridges Are Safe (For Now) 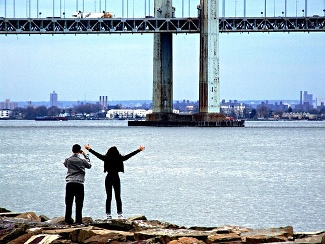 Earlier this week, Governor Spitzer said that a quick review of the state's bridges showed that all are basically safe, including ones with similar designs to Minneapolis' I-35. However, some bridges, such as the Brooklyn Bridge, rated low on a 7 point scale (7 being the safest) for safety. Still, Spitzer touted the fact that this year's budget added another $900 million to the $18.8 billion infrastructure plan.

But now that the NTSB are investigating whether gussets in I-35 may have been defective, the NY State Department of Transportation is trying to figure out what to do. Many bridges do have gussets, but it's unclear which have gussets like I-35. A DOT spokesperson said, "It's another thing we may be looking at but we really want to make sure we are focusing our resources on something that's truly a safety concern."

The MTA also announced some new restrictions for trucks on the Throgs Neck Bridge, to reduce wear and tear. Previously, trucks weighing 105,000 pounds could drive on the center lane at any time, but now the legal bridge limit will be back at 80,000 pounds.

Photograph of the Throgs Neck, from the Queens side, by many highways