During Occupy Wall Street’s heyday in 2011 and 2012, the NYPD made them pay, again and again and again, for exercising their right to assembly and free speech. Nearly three years later, New York City taxpayers are still paying for the NYPD's approach to policing lawful protest. Today, lawyers announced the largest settlement with New York City yet, with the city paying out $583,024 to 14 protesters who were arrested for disorderly conduct on January 1st of 2012.

Sources familiar with today’s settlement said that that the case was ready to go to trial before Judge Shira Scheindlin until a few months ago, when, while being deposed for the trial, a senior NYPD official who was present during the arrests was unable to point out in videos of the event a single moment when any of the defendants committed any act of disorderly conduct.

According to the protesters' complaint, the demonstrators were part of a march passing through the East Village that night when police ordered them to disperse.

“This was a constitutionally unlawful order,” said Wylie Stecklow, a lawyer for the protesters, at a press conference at City Hall today. “The march was not yet blocking the sidewalk, and just minutes before this unlawful dispersal order, the police had ordered the marchers to keep walking.”

Apparently not content with denying a group of citizens their right to assemble, the police then decided to kettle them for good measure, surrounding them on 13th Street, preventing them from leaving, all the while ordering them to disperse. Finally, the plaintiffs were arrested, charged with disorderly conduct, thrown into police wagons, and held at the precinct for five hours before being released with desk appearance tickets.

By the time their cases made it to prosecutors, the D.A.’s office didn’t think there were grounds to prosecute, so the charges were dropped. No harm done!

Today’s settlement comes on top of the $82,500 paid to a protester to settle a suit alleging he was beat up by cops, the $350,000 paid over the city’s trashing of media equipment and Occupy’s library during the eviction from Zuccotti Park, and the $50,000 paid to three people apparently arrested because police thought they might have been thinking of attending a protest later.

The lawsuit over Anthony Bologna’s pepper-spraying of kettled young women hasn’t even been settled yet. (For an even more comprehensive and dismaying look at how the NYPD handled the Occupy Wall Street protests, take a look at this report released by law schools at NYU and Fordham.) 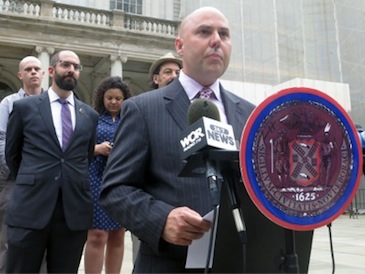 The Occupy payouts are still dwarfed by the $18 million payout the City made to the thousands arrested during the 2004 RNC.

David Thompson, the lead lawyer for the protesters, said the settlement is clear evidence that the NYPD needs to change how it treats political protesters.

“The mass arrest of nonviolent protesters has no place in any democracy,” Thompson said. “Arresting nonviolent protesters helps to protect the true wrongdoers, who are the people, politicians and institutions that have corrupted our economic and political life. The NYPD pursued a policy of arresting thousands of people who were doing nothing wrong.”

Payouts to wronged protesters are a start, not an end, Stecklow said. The city needs to retrain its police force, which is frequently misinformed and mis-trained when it comes to understanding the legal circumstances under which they can restrict protesters free speech rights.

“Occupy was and is a demonstration of the disillusionment and sorrow that many of us feel about America,” said Jennifer Peat, a 36-year-old organizer for the Screen Actors Guild, and one of the plaintiffs in the suit. “Public speech, and the right to dissent, are core values important for our democracy, and I hope that this settlement will lead those in power and the NYPD to better respect our First Amendment rights.”

“We’ve often been seen as out of control, or disorderly,” said Garrett O’Connor, another plaintiff. “This is a demonstration that it was quite the opposite. We were out there to send a message, and our rights were suppressed.”

In a statement, a Law Department spokesperson said, “This involved a fast-evolving, complicated policing situation occurring over many hours where only a small fraction of protesters was arrested. Settlement was in all parties’ best interest.”

Nick Pinto is a freelance writer who previously wrote about Occupy's undercover officer for Gothamist.

#first amendment
#nypd
#occupy wall street
#ows
#Right to assemble
#original
Do you know the scoop? Comment below or Send us a Tip