CitiBike Is Great But Let's Not Pretend It's Always Cheap

Yesterday, after what felt like years of waiting, the city introduced us to the pricing scheme for its ambitious new bike share program, now dubbed CitiBike after its sponsor (Citibank). And the reaction was mixed. While many—including us! We swear!—are very excited to see the program prosper and bring more cyclists to the streets, its very aggressive pricing had us (and others) worried. Yes, New York's bike share will be the largest in the world but it will also be the most expensive. Well, sometimes.

The thing that makes talking about BikeShare's expensive nature tricky is that—as our commenters were happy to point out—it isn't always expensive. If you buy the $95 annual pass, the first 45 minutes of a ride are free—and most rides people take in the city are under 45 minutes (we time our rides daily and rarely hit 30 minutes). Further, those worried about being charged for overtime because a rack was full don't have to, you'll be able to get a 15-minute "grace period" via the full rack's MasterCard-sponsored console. If you use the bikes regularly, the price quickly drops to pennies a day.

But thing get tricky with the longer rides (see the pricing chart here). Yes, we understand that the explicit purpose of CitiBike, per the city, is to facilitate short trips and not longer trips—but that doesn't mean they need to make the idea so prohibitively expensive. Especially as people will use them for those rides. It certainly isn't like that in other cities. Reuters' Felix Salmon create a graph to compare New York's program with DC's and London's for rides up to 24 hours (for those with single day passes) and, well, see for yourself: 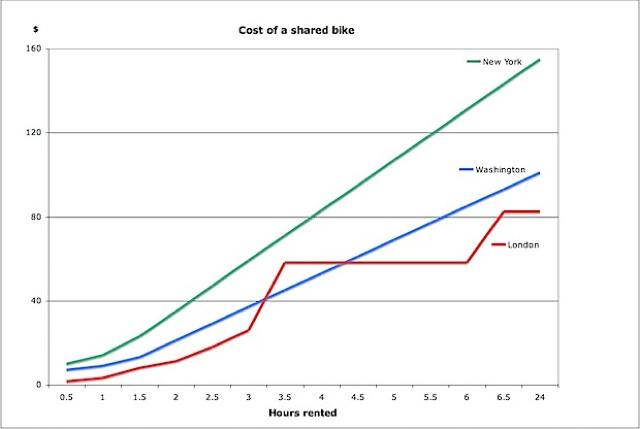 And those who say there is a simple solution to this issue—just stop at a rack every thirty minutes and "re-up"—are sadly wrong. By design you won't be able to take the bike out again for a "couple of minutes," according to Alta Bicycle Share, the company running the program.

Plus, another other problem with those poo-pooing long ride concerns are the location of the CitiBike racks. Right now we just don't know exactly where the city is going to put the initial 600 racks besides that they will be in lower Manhattan and north Brooklyn—that announcement should come later this week—but one thing is clear. They won't be everywhere. So if on a nice day you want to bike from Midtown to a meeting in Astoria, CitiBike would not be a financially feasible option, yet—things will obviously change when racks stretch across the city.

Considering that the CitiBikes themselves are already designed to be hard to take on long trips ("like a tank," as some commenters put it) and that there is already a hefty $1,000 fine for losing one, we just don't understand why the program needs to be quite so expensive for longer rides. Sure, it'll help bike rental shops stay in business—but it will also, if the quotes the Post managed to scare up are any indication, help scare away potential users of the program. Or maybe that was the point? Is the city worried that there simply aren't going to be enough bikes initially?

#bicycles
#bike share
#citibike
#cyclists
#dot
#pricing
Do you know the scoop? Comment below or Send us a Tip