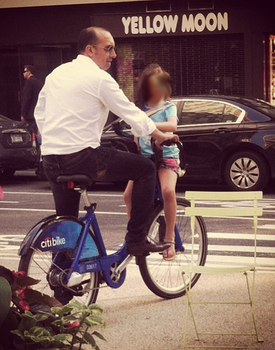 Citi Bikes come equipped with a handy storage space at the front, which is great for carrying around your purse or a loaf of bread, but probably not your offspring.

This cyclist seems to think he and his daughter (presumably his, unless she came with the bike) are immune to the dangers of the open road. The child is perched precariously in the bike's basket, and both are just cruisin' without helmets, wooo!

I might be slightly sensitive to the phenomenon of irresponsible cycling, as one of my earliest memories was of my father attempting to bomb a grassy hill on his bike while my three-year-old self sat strapped to a seat in the back. Of course, he crashed, sending me and the bike bouncing onto the sidewalk. I'm still pretty annoyed about it, but at least someone had the good sense to encase my delicate baby skull in a helmet, for crying out loud.

Not all of Gothamist HQ is united in this view. Christopher Robbins said he would totally put his kid all up on the Citi Bike, no problem. (For what it's worth, Robbins is not currently in possession of any children.)

"I just think it's part of the natural progression of being more comfortable on a bike in NYC. This is reckless, but not necessarily A Terrible Thing," he said in an email. "What about those parents who raise their kids up like Superman and 'fly' them around, or kids who sit on their parents' shoulders? Far more pedestrians than cyclists are struck by vehicles every year."

FINE. Safe or not, this brazen father clearly violates several Citi Bike rules, including that "you must not carry a second person on a Citi Bike bicycle," and that cargo in the carrier must not exceed 17 pounds. Also: "You must not otherwise use the cargo carrier improperly with regard to type of contents or any visual obstruction or riding impediment."

I'm no expert, but this kid is almost definitely weighs more than 17 pounds, and I would argue that her lanky prepubescent legs dangling into the wheels pose a serious impediment to navigating traffic. But what do I know—I'm probably still suffering brain damage from my First Bike Crash.

#bike share
#citi bike
#no helmet
#parenting
#original
Do you know the scoop? Comment below or Send us a Tip