Citi Bike Workers Demand Raise They Say They Were Promised

Jason Kelleman works as a Citi Bike station technician, earning $16.91 an hour to ensure that the kiosks function smoothly. Kelleman says he loves cycling, and loves what Citi Bike has done for the city. "I think the program's fantastic," he told us, adding that since it's been introduced, drivers have become more aware of their surroundings. Kelleman also says he hasn't received a performance review or a raise since he began working for the company in 2013. This morning, Kelleman and a handful of other Citi Bike workers gathered outside the bikeshare system's largest and busiest station on 31st and 8th Ave to demand higher wages and improved health and safety measures.

Citi Bike's 200 workers are members of TWU Local 100, and have been in contract negotiations for a little more than six months. The workers say that Citi Bike's old owners, Alta Bicycle Share, promised them a $1.50 raise last January 2014.

Last fall, a real estate investment firm bought a controlling stake in the company, and invested $30 million into the troubled company to keep it afloat; Citi Group pledged another $70 million through 2024, and the Goldman Sachs Urban Investment Group kicked in $15 million, along with $5 million from a city investment fund.

Edwin Aviles, a driver for Citibike who earns $18 an hour, says that these investments prove that the company, which is managed by a company called Motivate, can afford to make good on the promised raise.

Motivate has offered the employees a 50-cent raise, while the workers are asking for $1.50 retroactive to January 2014.

“Since assuming ownership of Citi Bike a few months ago, Motivate has been very committed to the collective bargaining process," says Motivate spokeswoman Dani Simons. "While it is inappropriate to discuss ongoing negotiations in a public forum, it is very important to note that all of our employees are paid a living wage. All of our full-time employees - which represents 80 percent of our workforce - have a generous benefit plan that includes health, dental and wellness reimbursement. We look forward to continuing to have a positive dialogue with our workers.”

"I can't complete my monthly rent with only one paycheck," Aviles said, adding that he had a family to support. According to MIT's Living Wage Calculator, a living wage for a family with one adult and one child living in Brooklyn is $24.69 an hour. Last September, Mayor de Blasio raised NYC's living wage amount to $13.13. 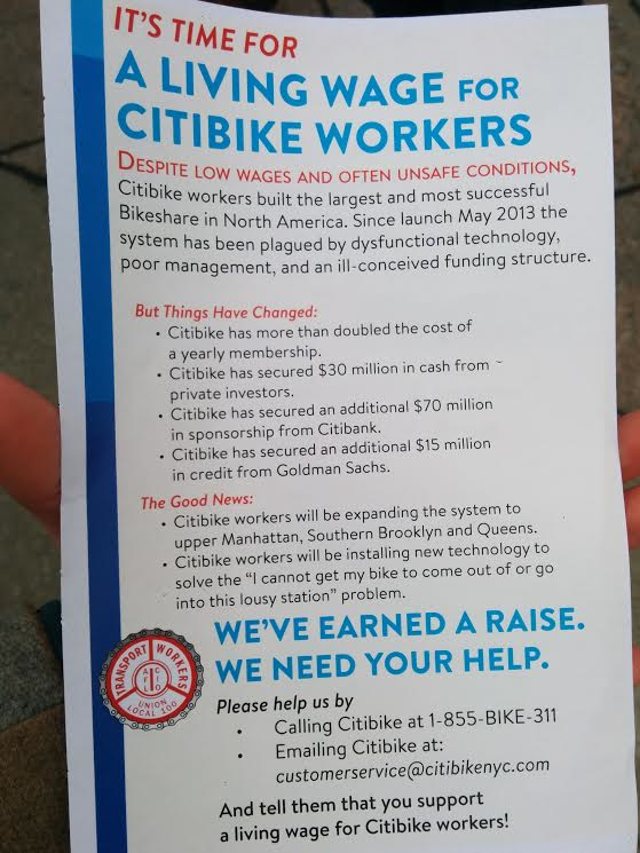 #bikeshare
#citi bike
#TWU Local 100
#unions
#original
Do you know the scoop? Comment below or Send us a Tip