Despite a seemingly endless concatenation of financial and technical difficulties, many New Yorkers still seem to be enjoying their bike-sharing program quite a lot (love the adorable new out of service dock cozies!). So much so, in fact, that they have bent the laws of physics to travel impossible distances, traversing alternate dimensions in their attempt to get from Midtown to SoHo before their 6:45 reservation at Gato.

As a tipster informed us, Citi Bike's latest newsletter, trumpeting its 20 millionth mile, made some strange and telling calculations when trying to give New Yorkers some idea of how much Citi Bike riding they've done. 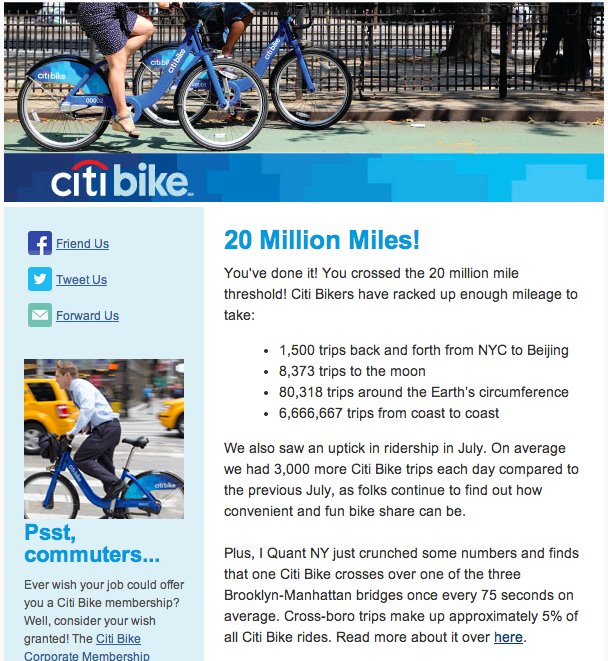 The newsletter in question.

New Yorkers seem to be following the laws of physics when going from NYC to Beijing (a long but not impossible journey), it's when they get really ambitious that they take a shortcut through the Phantom Tollbooth. As a Reddit commenter points out, we've only taken (theoretically) 83 trips to the Moon, and biked around the Earth a mere 803 times. But for these journeys, Citi Bike users typically turn left onto First Ave (because that's where cops park in the bike lane) and directly into a dimensional wormhole where they experience time as something observable, something that can be brought forward and backward (all at the same moment) as those Citi Bike wheels spin fruitlessly through the void.

We also took 7,207 trips across the country, which was a tad fewer than the 6,666,667 trips Citi Bike previously bragged about. But what's a few million here or there when Citigroup is picking up the tab?

A Citi Bike spokesperson tells us that the math has been corrected on their website, and that, OF COURSE, an intern was to blame. Reached for comment on the far side of Jupiter's moon Callisto, the intern told us, "I've seen things you people wouldn't believe... Attack ships on fire off the shoulder of Orion. I watched c-beams glitter in the dark near the Tannhäuser Gate. All those... moments... will be lost in time, like tears... in... rain...."