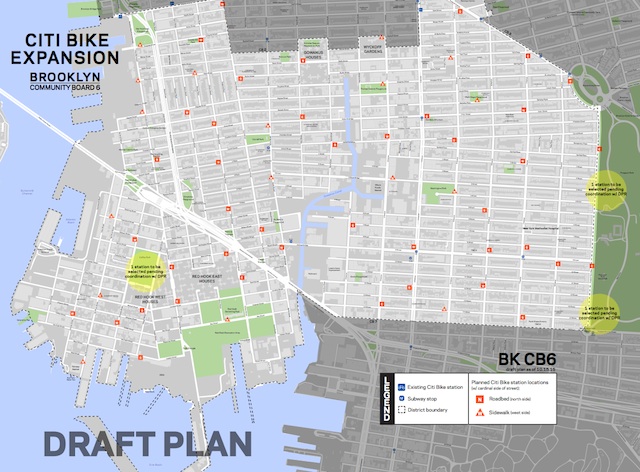 The locations—which will span Red Hook, Carroll Gardens, Cobble Hill, the Columbia Street Waterfront District, Gowanus, and Park Slope—were announced at a meeting of Community Board 6's Transportation Committee on Thursday, with the rollout slated to commence in 2016 and finish up by 2017.

Unlike their counterparts on the Upper West Side, some residents griped that there weren't enough stations, particularly in the transit-starved neighborhoods of Red Hook and the Columbia Waterfront. Still, it's a start, board members said.

“It’s very capital and labor intensive to roll out the stations,” committee member Bill Blum told the Brooklyn Paper. “But the plan is to fill it in and, overall, it’s a great beginning.”

The committee unanimously approved the DOT's proposed docking stations, with the understanding that representatives from the agency will return after installation is complete for an update.

My, how times have changed.

#brownstone brooklyn
#citi bike
Do you know the scoop? Comment below or Send us a Tip