The contents of an audit conducted by Comptroller Scott Stringer's office contain no revelations that any regular user of Citi Bike wasn't already acutely aware: The docks are often busted, and the availability of bikes (or open spaces to park them) is essentially a crapshoot.

The audit found that NYC Bicycle Share, Citi Bike's operator, has failed to meet the terms of its contract with DOT :

Specifically, NYCBS did not: (1) perform maintenance checks on all bicycles on a monthly basis; (2) perform station inspections twice per week; (3) ensure that on-street maintenance checks of bikes were properly documented; (4) respond within the required timeframes to cleanliness issues with bicycles and stations after discovery or notification of problems; and (5) maintain connectivity of stations to its main database at required levels.

"As a result of these deficiencies," the audit claims, "the riding public is exposed to increased safety risks and customer satisfaction is potentially jeopardized.

According to NYCBS's own data, bike maintenance fell considerably below the requirement that 100 percent of the bikes be inspected, even after 16 workers laid off during the winter months were rehired in the spring. The audit also found that 40 percent of stations reported for cleanliness issues were not addressed, and that 83 percent of cleanliness complaints were unresolved for an average of 79 days.

The audit comes with a series of suggestions, which essentially amount to 1) Hey, how about start checking out the bikes once in awhile, in case they're broken or covered in feces? and my personal favorite, 2) "NYC Bicycle Share should procure the software necessary to allow it to remotely lock bikes at stations." Oh OK! 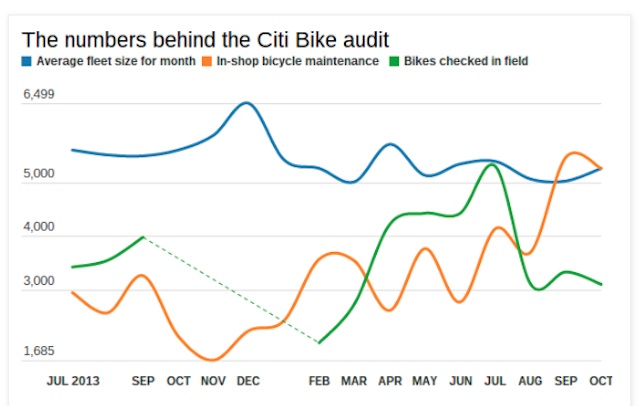 Stringer's not angry, he's just disappointed: “New York City Bike Share’s management of Citi Bike left too many New Yorkers in the lurch," he said. "While Citi Bike has become part of our urban landscape, auditors found that the bike sharing program’s spotty maintenance, poorly-cleaned bikes and substandard docking stations inconvenienced riders and discouraged growth in the system. Moving forward, I hope that these findings will provide a road map for ways to improve safety and performance for this critical component of our transportation network.”

Of course, all of the issues boil down to the unfortunate fact that Citi Bike has been in a financial lurch for much of its existence, though that should be coming to an end now that it's been given a $30 million cash infusion by an investment group. The program is slated to double the number of bikes across the city by 2017, though most New Yorkers would probably prefer NYCBS focus on solving its current problems before embarking on a hasty expansion.

From the sound of it, the incoming CEO of Alta Bicycle Share (parent company to NYCBS, thus, grandparent company to Citi Bike), Jay Walder is aware that he'll have his work cut out for him:

“We agree that while Citi Bike has been hugely popular with New Yorkers, the previous ownership of the company was not able to provide the resources necessary to deliver on its potential," he said in a statement. "With new ownership and an experienced management team being put in place, we are already beginning the hard work of reinventing Citi Bike. New Yorkers will see a much better service in 2015 and moving forward.”