Citi Bike Is Expanding In Brooklyn And Northern Manhattan This Summer

Citi Bike is continuing its "dramatic expansion" this summer, with new docking stations to be installed in Boerum Hill, Cobble Hill, Carroll Gardens, Gowanus, Park Slope, and Red Hook, as well as in Manhattan up to 110th Street. Currently, stations in Manhattan only go up to 86th Street, and there's just one docking station south of Atlantic Avenue in Brooklyn. This expansion will add 140 new stations, bringing Citi Bike up to more than 600 docking stations and 10,000 bikes by the end of 2016.

Notably, new stations will also be added to areas with existing service to improve density there. That's 42 additional stations, to be precise, and they'll be installed in neighborhoods including the Upper East Side and Upper West Side. Citi Bike's initial expansion on the Upper West Side last year was met with concern and fear at the local community board, where residents worried there would "be way too much combat between Citi Bike riders and pedestrians," so one might expect they wouldn't be thrilled to hear that the UWS is getting even more stations—but recently, the West Side Rag reported that many locals were frustrated by frequently-empty docking stations, so perhaps this will come as welcome news.

The National Association of City Transportation Officials recommends that there should be 28 docking stations per square mile, a metric that, Streetsblog notes, the UES and UWS expansions have fallen short of. With that in mind, these 42 stations should be, overall, a helpful addition for Citi Bike users in areas where service is currently a bit sparse. 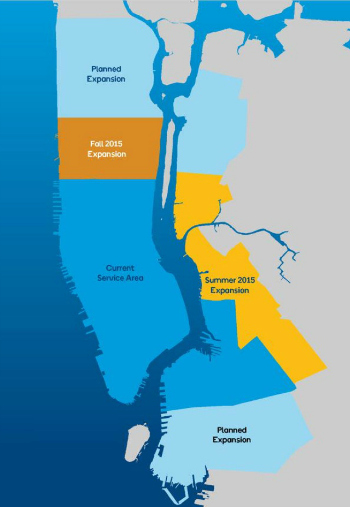 Residents in the Brooklyn neighborhoods slated for the expansion have been quite receptive to the idea: when it was first floated last fall, Community Board 6 residents welcomed the plan but said they'd be open to even more docking stations—one CB6 member said at the time that "it's very capital and labor intensive to roll out the stations...But the plan is to fill it in and, overall, it's a great beginning."

Mayor de Blasio announced the expansion on Thursday along with Citi Bike and its operators, Motivate, saying that "my former neighbors in Park Slope will certainly welcome the blue bikes this summer, and their arrival in transit-deprived neighborhoods like Red Hook illustrates our continued commitment to strengthening all of our communities and fighting inequality."

Citi Bike is also expected to expand up to 130th Street this year, though initial plans show that the stations will be considerably more spread out than those below 59th Street in Manhattan. Those plans have been making the rounds to Manhattan Community Boards 9, 10, and 11, but aren't yet official.

No word yet on exactly where the newly planned docking stations will go, but we expect those details will be released in the coming months, as the expansion is planned to begin in August. Ultimately, Citi Bike's hoping to have 12,000 bikes across 700 stations by 2017.

#bike share
#citi bike
#cycling
Do you know the scoop? Comment below or Send us a Tip