Citi Bike Gets Massive Cash Infusion, Will Double By 2017

First Citi Bike was tanking, then it was tanking harder, but now, the embattled bike share program has officially locked down a deal that will deliver it the funds it needs to not only stop tanking, but actually expand!

Alta Bicycle Share—Citi Bike's parent company—is now under the sole ownership of a group of investors known as Bikeshare Holdings LLC (née REQX), who are preparing to dump $30 million into the program, enabling it at long last to grow from its original 330 stations and 6,000 bikes to more than 700 stations and 12,000 bikes by the end of 2017. Stations are slated to appear in Harlem, Astoria, Long Island City, Greenpoint, Williamsburg, Bushwick, Prospect Heights, Crown Heights, Park Slope, Carroll Gardens, Boerum Hill, Cobble Hill, Red Hook, Gowanus, and a larger portion of Bed-Stuy. Currently, racks are limited to Manhattan and a limited swath of north Brooklyn. 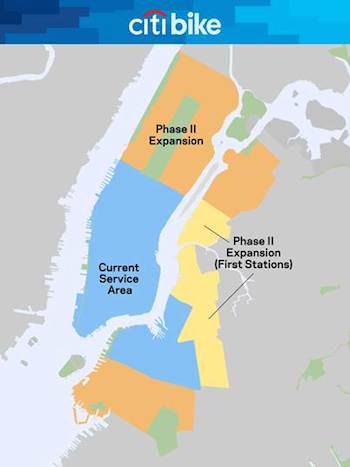 Citi Group, the program's namesake, has also committed another $70.5 million through 2024, and the Partnership Fund for New York City will contribute another $5 million, according to a release. The Goldman Sachs Urban Investment Group also pledged a credit increase of $15 million for added financial flexibility.

"We believe in Citi Bike’s potential as a fixture of New York City’s public transit system," said Mayor Bill de Blasio. "It can make our neighborhoods more accessible, help us achieve our sustainability goals, and bridge inequities in our transportation network. To achieve all that, bike share has to be reliable and responsive to community’s needs."

In addition to the new ownership, former MTA chairman Jay Walder is being brought on as Citi Bike's chief executive, and it will be up to him to iron out the systemic challenges that have plagued the program since its infancy—the initial surge in costs thanks to the rapacious waters of Sandy, to the messy corporate tussle over the system's proprietary technology, the preponderance of broken down bikes and the resignation of the company's general manager. Walder, who resigned from the MTA in 2011 to head up the mass transit system in Hong Kong, was ousted after a series of snafus derailed (ha) his projects over there. Is he ready to take on the crushing responsibility of repairing a hobbled system that so many New Yorkers want to love, but can't thanks to a relentless history of setbacks and bad luck?

Advocacy group Transportation Alternatives seems prepared to give him a shot. "The announcement that former MTA chairman Jay Walder is bringing his years of transit management experience to the position of CEO at Alta Bicycle Share sends a powerful message that Citi Bike has a bright future as an established form of public transportation in New York City," Executive Director Paul Steely White said in a statement. "Jay Walder is the perfect leader to streamline the user experience and better integrate Citi Bike with bus, train and ferry options."

Regardless of the massive cash infusion, another rub is that membership prices are going to rise, with annual membership fees spiking nearly 60 percent from $95 to $149. On the bright side, monthly and seasonal passes will be made available, whereas the current options are limited to $25 weekly and $9.95 day passes.