DUMBO's main drag is located at the bottom of a large, steep hill, and this distinctive geographical layout appears to be heavily influencing the choices made by local Citi Bike users: you can grab a bike on the way to work and coast almost all the way to your office, shaving time off your commute and enjoying a little exercise. But this flow of riders coming down the hill each morning is not balanced by traffic going back up the hill, because that's a hard ride and most hipsters are lazy. Also, the tourists who might enjoy taking the bikes out to see Brooklyn Bridge Park don't arrive until later in the day.

The result is that from about 9 a.m. on, all Citi Bike stations in DUMBO proper have been fully booked. This total dockblocking is putting commuters between a dock and a hard place: you either have to bike back five or six blocks to the closest unblocked station, or not do the ride at all. 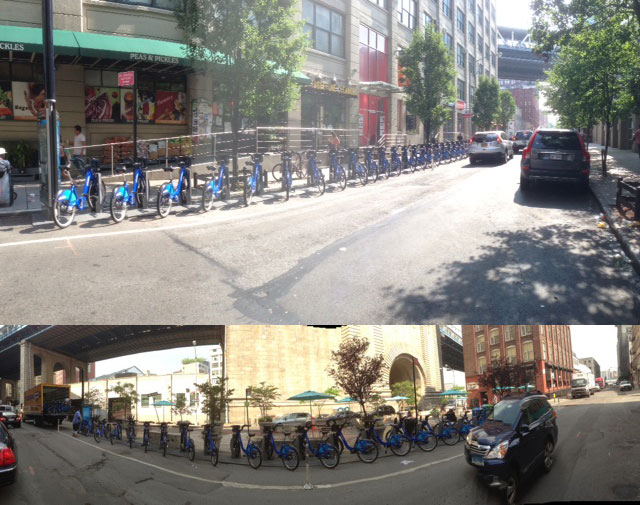 This is what it looks like when every dock is taken and your heart breaks.

I was the victim of this severe dockteasing yesterday morning. As usual, I grabbed a bike by the Promenade, and coasted down the hill to the Pearl Street Triangle, where I usually park. The station showed availability on the app map, but no dice—the large dock (23 slots) was fully blocked, and I found myself severely bluebiked. I was forced to salmon all the way back to the Front Street station at Washington Street, which, to my astonishment, I also found fully saturated: total poppydock.

So I ride up to Jay and York, which is up a fairly large incline. Once again, no docks! There's one guy there who looks like he's about to pull out a bike, but there's already another Citibiker there, and I don't want a dockfight on my hands. So I check the map and see there's availability at Front and Gold, three blocks away. I salmon up York to get there, and lo-and-behold, the place is half-docked and I finally park. By now, I'm pretty sweaty and pissed, and ready to rain down some serious dock-and-awe on the @citibikenyc Twitter account.

Unusual @CitibikeNYC problem: rode down from the Heights to Dumbo- tried to park, but all 3 stations have no open docks!

@maxlinsky @CitibikeNYC I think it's a work commute rebalancing issue- they got to rebalance faster in mornings! Also map was wrong 3 times

@sstrudeau @CitibikeNYC It could also be solved with larger docks in DUMBO- I think there's still a lot of room by Pearl Street Triangle.

@sstrudeau You could also offer incentives- like "an extra 60 minutes if you take a bike from these special docks!" or free day passes

This morning, I didn't ride, because I was already running late, but I walked by both stations and same deal: a bunch of riders getting colddocked by full-up stations, looking around anxiously for somewhere to park. At Pearl Street, there was actually a huge Penske Truck loading bikes, but now, a half hour later, the map is saying (accurately?) that the station is once again fully docked. The usage gradient is obviously pretty strong: I've checked other neighborhoods on the map over the last few days, but none seem to be suffering from overflow as much as DUMBO: this may be a unique quirk of geography and commuting patterns. 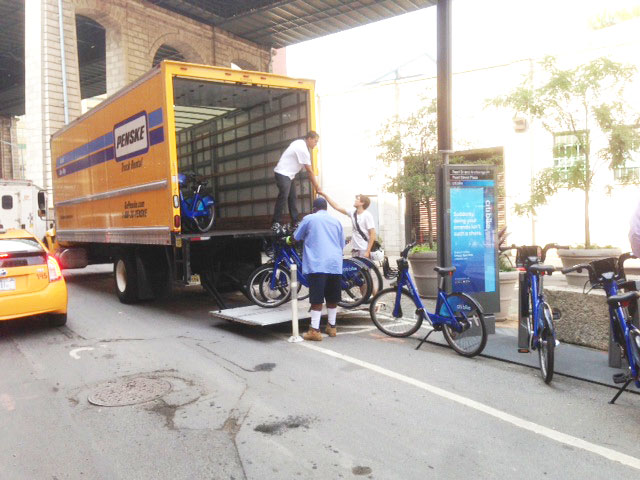 I've reached out to Citibike to see if they've got any ideas on how to solve this problem, and they declined to speak with Gothamist on record. We were referred, instead, to the DOT, which has not yet responded to our inquiry. I'll let you know if they get back with answers or spin some dock-and-bull story.

UPDATE: In an email, DOT spokesman Seth Solomonow said, "The demand in DUMBO is just tremendous day and night and while rebalancing bikes is one part of the solution (and one that we’re refining as we identify commuting patterns), this also occurs in many other neighborhoods that don’t have hills, such as Lower Manhattan and Midtown. I’m checking on the app. It’s possible there could be a discrepancy—maybe reflecting docks where riders have reported a bike that needs servicing." 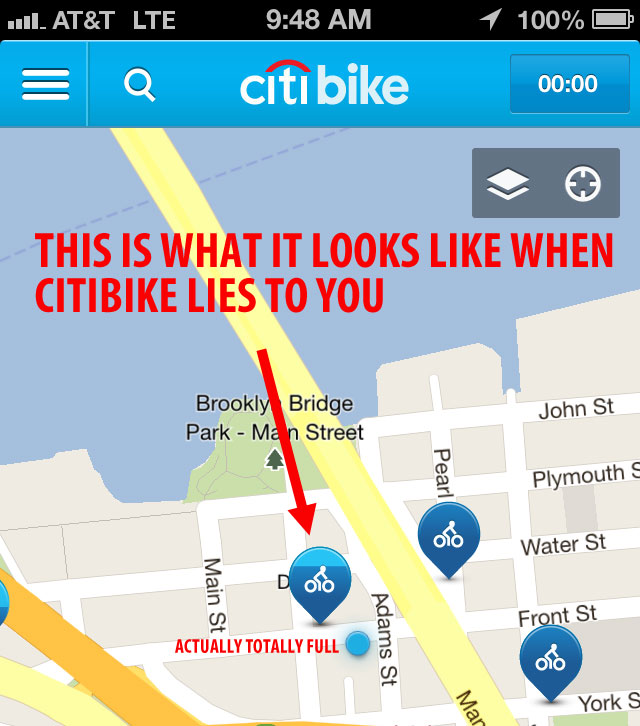 PS: I tried to figure out a way to use the word docksucker in this story but failed.

#biking
#citibike
#dumbo
#whitewhine
#original
Do you know the scoop? Comment below or Send us a Tip